The Arizona Diamondbacks front office couldn't repress their smiles just moments after drafting two right-handed pitches with the third and seventh overall picks in the 2011 MLB Draft. Trevor Bauer, a junior from UCLA, comes to the D-backs with incredible numbers. Archie Bradley, a two-sport start from Oklahoma is equally considered an impact prospect.

Bauer was described as "the most dominant college pitcher in our memories" by Senior Vice President, Scouting And Player Development Jerry Dipoto. Dipoto said the team's area scout first identified Bauer at the age of twelve and watched everyone of his starts with the UCLA Bruins.

Bauer was named Collegiate Baseball's National Player of the Year, Pac-10 Pitcher of the Year and is a semifinalist for the USA Baseball Golden Spikes Award after posting a 13-2 record, 1.25 ERA and NCAA-best 203 strikeouts in 16 starts this season for UCLA. The three-time All-Pac-10 selection has thrown 10 complete games this year, including nine straight to end the season after April 9, and led all conference pitchers in ERA, strikeouts, innings pitched (136.2) and opponent's batting average (.154).

Dipoto, a former pitcher who's been around the game for 30 years, paid Bauer this compliment, "Every time I go watch this guy pitch I feel like I learn something more about pitching. He's a pretty unique talent, so we're thrilled to have him."

Archie Bradley is a two-sport star which is appealing to GM Kevin Towers. The team has had discussions with Bradley about his decision to sign with the D-backs or accept a scholarship to play quarterback at Oklahoma.

"We have every faith that we are going to get these guys signed, get them in the organization, and develop them properly," DiPoto said.

The team wasn't willing to set timetables on either Bauer or Bradley and deflected questions about reports that Bauer could pitch as soon as this season for the big league team. The first priority will be to get the players signed and the timing of that will dictate where and when they play. They emphasized that neither player would be rushed but suggested the Bauer especially wouldn't be a guy they expect to spend too much time in the minor leagues.

"We're hopefully going to get him signed, get him out there and put him in a circumstance where we allow him toward the big leagues as quick as he's able and make an impact on our big league club. Whether that's 2012, 2012, I can't say until we get him into our system but our plan for Trevor Bauer is not to carve through the minor leagues one year at a time." 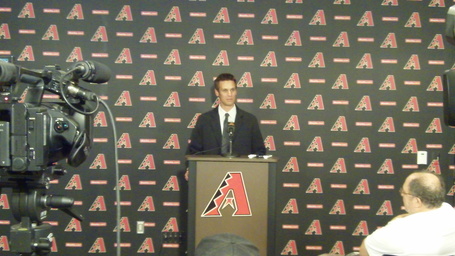 Arizona Diamondbacks Senior Vice President, Scouting And Player Development Jerry Dipoto addresses the media after the team selected Trevor Bauer and Archie Bradley in the first round of the 2011 MLB Draft.