Partyin' Like It's 1989: Tiegate Is Unleashed In The Diamondback Clubhouse

We all have skeletons in our closets. The embarrassing haircut that was totally cool at the time (it wasn't), or that radical flame shirt the girls just loved (they didn't). Fortunately for most of us, those shameful displays can stay locked away in brittle family albums and dusty old VHS cassettes of the easily smashable variety.

But if that blemish on your record ever once hit the light of day -- thanks to the wonders of the internets -- oh you can bet we'll see it eventually. So let's just say you were Diamondbacks manager Kirk Gibson in 1989. A star slugger for the Los Angeles Dodgers, riding high on your fame, sporting a power mustache for the ages. Then say you got a chance to showcase your acting chops in a partially-nude, kind of incriminating, Jacuzzi-chest-hair laden deodorant ad. Not quite something you'd want to come back to you 22 years later when you're the tough-as-nails manager of veteran-filled MLB team.

Of course once Kelly Johnson and J.J. Putz saw this comedy gold, they felt ever-so-compelled to spread the wealth with the rest of us. And for that we thank them. 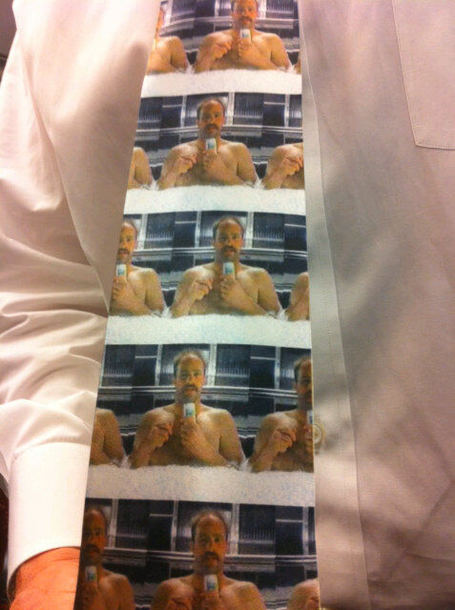 This is what awaited the D-Back's skipper as he came into work Tuesday morning. On the neck of every employee.

Tiegate, as they are calling it, may have already gone down into the halls of legendary Diamondback pranks. Overall, over 40 ties were made by Johnson, and passed out to anybody who had anything to do with the organization. Good times were had by all.

Though, as much as they would like it to be, that's not quite the end of the story for the two perpetrators. Pranks never end after the first shot, a fact that Putz was wearily aware of.

"I'm definitely going to be looking over my shoulder. Checking my shoes, my clothes. Possibly my mail," the closer-turned-video research coordinator said in the aftermath. "I don't know what he's really capable of."

The crafty old slugger has been in this game for a while now, so Putz's reservations are probably justified. While Gibby obviously appreciated the creativity of the joke, he made his impending intentions quite clear.

Johnson and Putz should take heed of the warning.