The Diamondbacks/White Sox game drew 26,053 fans to Chase Field on Friday night, and after watching Daniel Hudson and company defeat Chicago, the crowd turned its attention to the skies -- it was fireworks night.

Gila River Casinos have sponsored the fireworks displays all season long, and another exciting show was expected by those in attendance.

After a 10-15 minute wait, the lights dimmed and the fireworks began, launching off of the parking garage roof on 7th Street and Jefferson. It was only a moment before things went decidedly awry.

From my vantage point outside Gate K, it appeared as though a large portion of the fireworks began exploding on the rooftop, causing a cloud of smoke and a lot of car alarms to go off.

Most dangerous, however, was a firework that careened off the side of the garage and exploded roughly 50 feet above the intersection of 7th Street and Jefferson.

The fireworks display was quickly stopped, and from the outside of the stadium I could hear a chorus of boos and disappointment. Most fans couldn't see what happened, and were angry at the shortness of the display.

The fire alarm on the parking garage was soon pulled, and disappointment quickly turned to concern. They soon began allowing fans to cross the street and move their cars out of the parking garage, but there has been no official word as to whether anyone was injured during the display.

It was a surreal moment, and it is my sincere hope that no one was hurt. 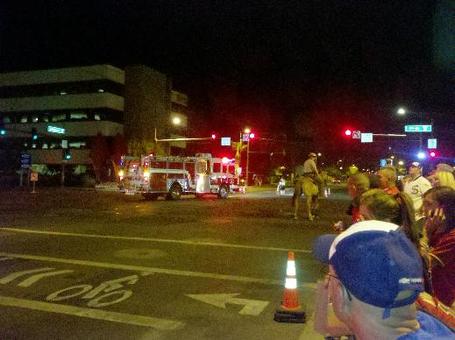 A Phoenix fire truck blocks the intersection of 7th Street and Jefferson after responding to a fire alarm on Friday, June 17, 2011. A fireworks celebration at the Diamondbacks game was quickly stopped after some low explosions occurred. 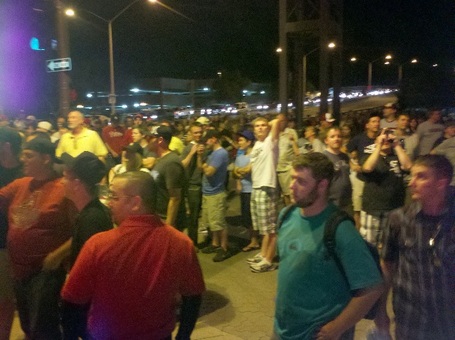 A throng of baseball fans wait to cross Jefferson while the fire trucks respond to the fireworks fire alarm.