Diamondbacks GM Kevin Towers wears his heart on his sleeve and shoots straight.

So when it came time to talk before Tuesday night's game about how the club might fare this season, there wasn't a whole lot of positive things to say. And judging by the number of times Towers rubbed his brow or bridge of his nose, he's probably had some stressful days and nights trying to figure out what, or rather how many things are wrong with his team.

The D-backs won their afternoon split-squad game Tuesday against the Chicago Cubs, 15-8, in Mesa. But even that brought them to 12-25, tied for the worst winning percentage (.324) in the majors in spring training.

Shortstop Stephen Drew had an MRI this afternoon and saw an abdominal specialist regarding the injury he's dealt with since the middle of this month. At least the news from that was promising --  Towers didn't think it would be anything serious, and it doesn't appear to be. Drew's MRI was negative and he has a lower abdominal strain, and his status is day-to-day, but depending on how he feels, he could still miss the start of the season.

Towers was asked if he had a Plan B; he said Tony Abreu is the best in-house candidate to play shortstop but that he doesn't want to divulge what he'll do if Drew is not available.

Towers said he'll be talking to players after Tuesday's game to let them know whether they made the major-league roster. Ryan Roberts continued his spring training tear, hitting a grand slam in the first inning against Los Sultanes de Monterey from the Mexican League.

Towers said he was disappointed in how the D-backs played in spring training. He was hoping for momentum over the last week of games but it didn't happen.

"When I was in San Diego we had bad springs and still performed well (in regular season)," Towers said. "We're going to know the first month of the season whether we contend or not.

"My hope is it's a club that is fundamentally sound, and that didn't work out this spring," Towers added.

Towers brought up the notion that players who aren't on board with what he and manager Kirk Gibson expect will be quickly replaced.

"I was impressed with the young players at the Double-A, Triple-A level," he said. "They're hungry to take these guys' jobs."

San Francisco and Colorado are the teams to beat in the NL West, Towers said. He also wouldn't commit to naming a starting left fielder even though Gerardo Parra was batting .338 this spring, not including what he did Tuesday.

Tuesday night was a dress rehearsal of sorts at Chase Field for the home opener that is still more than a week away. Roberts' homer was the biggest hit of the night, but not the farthest. Brandon Allen crushed a 3-1 pitch from Edwin Salas well over the yellow line in straightaway center to make it 5-0 in the third inning.

The Diamondbacks went on to win 11-4 as Justin Upton and Chris Young has two hits and two RBI apiece. The bullpen shut down Monterey over 3 2/3 innings until closer J.J. Putz allowed a ninth-inning run.

At the stadium, the new LED lineup boards look good in green. 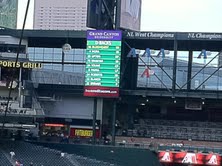 There was also some protesters outside one of the gates, calling for a boycott of the team and the All-Star Game in light of controversial SB 1070. 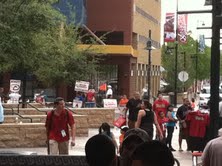