Nightcap: Diamondbacks' Montero Doing It On Defense And Offense

Share All sharing options for: Nightcap: Diamondbacks' Montero Doing It On Defense And Offense

The Arizona Diamondbacks are trying to make it two wins in a row and sweep a split-squad doubleheader after beating the Seattle Mariners 5-3 at Salt River Fields. They’re facing the world champion (ugh, I hate saying that about this team) San Francisco Giants tonight at Scottsdale Stadium.

Pretty good sized crowd in Old Town tonight, and a lot of big names in both lineups. The star after 1.5 innings is D-backs catcher Miguel Montero, who gathered in a throw from right fielder Gerardo Parra that was away from the baseline and swept his arm across home plate to tag out the Giants’ Freddy Sanchez trying to score from second base in the bottom of the first.

Parra made a decent throw but Montero turned what looked to be a sure run into an out.

Montero also has an RBI single in the top of the second off SF starter Jonathan "I’ve pitched a no-hitter before" Sanchez. Not tonight. Alas, the Diamondbacks just squandered a one-out, runners on second and third situation after the Montero RBI.

Zach Duke, a lefty, is the Arizona starting pitcher and he got out of a bases-loaded jam in the bottom of the first.

Funny moment already: D-backs 3B Melvin Mora pretended like he was going to catch a loose bat that slipped out of the Giants’ batter’s hands, getting under it like a pop fly. He wisely let it hit the ground. 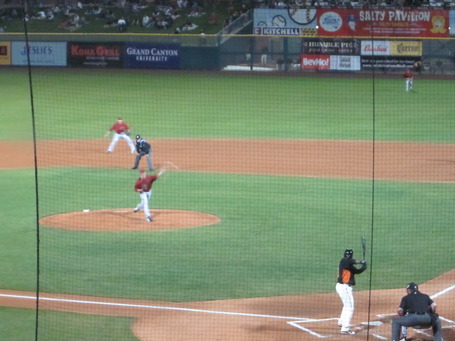 Update: Duke couldn't escape trouble in the second. A slimmer Kung Pu Panda (Pablo Sandoval) led off the second with a single, took second on another hit and scored on Chris Stewart's deep triple that was crushed to left-center. Stewart scored on a sacrifice fly and the Giants have a 3-1 lead in the top of the third.