You couldn't beat a night like Thursday for baseball weather, and Salt River Fields stadium is beautiful and so... new.

Hopefully the atmosphere and fan-friendliness of the park helped salvaged the evening for Diamondbacks fans, because the Chicago White Sox went after Armando Galarraga hard.

Safe to say that not one of the seven hits in three innings the White Sox got off Galarraga were soft hits. The Sox came out swinging.

With Galarraga's slider not working -- as he admitted after his outing -- he had to go to the fastball more, and the White Sox were ready. Chicago fielded a lineup of mainly starters. The two-run home run by Gordon Beckham, doubles by Alex Rios and Dallas McPherson and the triple by Alexei Ramirez were crushed and Chicago found the outfield gaps as balls got to the wall.

The White Sox did all their damage in the first three innings off Galarraga. The D-backs bullpen was solid, especially starting pitcher Barry Enright, who struck out three and gave up one hit in four solid innings.

The D-backs' offense was at least entertaining. Though they only got five hits, two were home runs -- a solo shot for Russell Branyan and a two-run bomb for Gerardo Parra.

Arizona is now 5-11 in spring training games and Galarraga (in photo below) has given up 7 earned runs in eight innings of work. 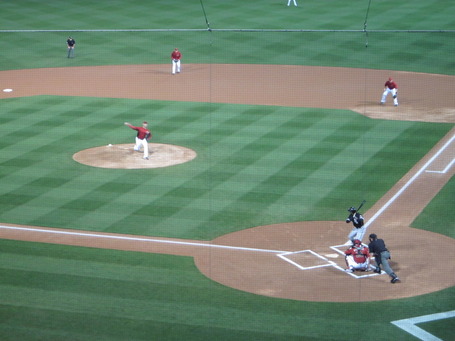