Mike Hampton Gives The Diamondbacks Something They Sorely Need

Share All sharing options for: Mike Hampton Gives The Diamondbacks Something They Sorely Need

Looking at the roster for the 2011 Arizona Diamondbacks, there's one thing that stands out -- no names stand out. The exception to that is Mike Hampton. Hampton, who signed a minor league deal with the Diamondbacks last summer, is the one and only player on the team with strong baseball cachet.

Gold Glove winner. Five-time Silver Slugger. MVP of the NLCS. Runner-up Cy Young Award. Two-time All-Star. And most notably, a guy who signed what once was the largest contract in baseball and is still the 25th largest in sports history.

Even casual sports fans know the name, "Mike Hampton"; or at least they did in the mid-to-late '90s when he was a star.

Now it's 2011 and Hampton isn't exactly mentioned in the same breadth as Roy Halladay and Cliff Lee, but he's what the Diambacks have and they seem pleased as punch that he's here.

"I want Mike to do well. His experience is invaluable," skipper Kirk Gibson said.

For his part, Hampton doesn't seem to have any misgivings, regrets or delusions of grandeur when it comes to his role on the D-backs. He's not looking to be the face of the franchise or dominate the media discussion. In fact, other than the name "Hampton" above his locker, you wouldn't know that a player of this caliber was on the team.

The eight competitors for five starting jobs in the Diamondbacks' rotation don't even have to worry about the shadow of a guy who once had a 22-4 record with a 2.90 ERA.

"I feel like at this point in my career my best option's going to be in the pen," Hampton said when asked if he had any interest in a rotation spot.

The lefty feels that his role on the team will most likely be that of an innings-plus guy but he's open to be whoever the team wants him to be.

"(I will) build enough arm strength to go multiple innings if need be, or an inning, or a batter. It really doesn't matter to me...I've faced lefties and righties so I think I can handle that role but at the end of the day whatever Gibby tells me to do, wherever he puts me, is where I'll be ready to go."

It's a good attitude to have given that Gibson doesn't have a specific job for him yet.

"If that's what this team needs, he could be. If it doesn't, he could be something else," Gibby said when asked if Hampton would be a lefty specialist like was at the end of last season. "He could start, theoretically. He has a lot of experience and knows how to pitch."

Regardless of his job in the pen, the role all agree on for Hampton is that of clubhouse sage. He understands that as a veteran on a team filled with young arms, his job goes well beyond throwing the ball when asked. Just this morning, I saw Hampton giving Micah Owings advice on his grip while the two tossed the ball during warm-ups.

"I'm here to help. I'm glad they're comfortable enough to come up and ask because I'll talk about baseball all day long," Hampton said. "There's a lot of young guys that have a little bit of time under their belt but they're still trying to establish themselves. I think we as veteran players need to set the tone."

One of those young pitchers, Daniel Hudson, talked about the value of having Mike Hampton on his team.

"Guys like that who've been around a long time, around the game, you just try and pick their brain every chance you get. How they attack hitters, especially since he was a starting pitcher for so long and he pitched in the same type of environment as Chase is when he was at Coors Field," Hudson said.

The role of player-coach has been gone from baseball for many years, but that is in essence what Hampton brings to the team. Of course, if he's going to take a spot on the major league roster he's going to have to perform on the mound and so far, he says his body is feeling good. Gibson said he's on schedule early in camp and has shown the ability to make the ball move to either side of the plate.

Hampton admitted that while he would like to play a few more years, he sees his role on the team as a transition to a possible coaching job when he hangs up the spikes.

"(Coaching is) definitely something I could see myself doing. I enjoy helping these young kids out and feel like I have quite a lot to offer. I'd like to play a little bit longer and then I'd have to think about that down the road." 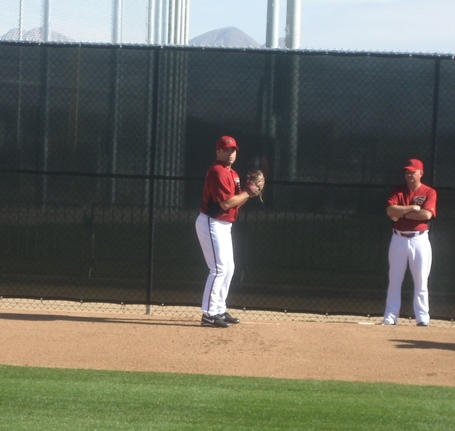 Video of Hampton throwing a bull pen session today can be found here.