On the second day of camp for Diamondbacks pitchers and catchers, the fellas rotated between stations doing things you might expect them to be doing in spring training. Bunting practice. Running. Hitting (catchers plus Micah Owings) and pickoff plays. Pickoff plays were an area of specific emphasis for Kirk Gibson.

"We know it can't be a weapon for everybody. But is there one guy? Is there two guys? Is there five guys?," Gibby asked rhetorically about his staff who received instruction from former pitchers Ed Vosberg and Mike Fetters -- two guys known for their ability to get some cheap outs via the pickoff.

More than just learning what his guys can do and enhancing their skills, he's trying to teach them to understand how to "navigate through trouble" when runners are on base in key situation. In addition to the pitchers working on their moves, Gibby wants his infielders to do a better job reading situations and communicating opportunities. He wants that to come from the field and not the dug out.

And The Opening Day Pitcher Is...

Looking at the roster, it's pretty obvious there is no leading candidate to take the mound on Opening Day. On a team lacking star power or a "face of the franchise", that decision is weeks away. Randy Johnson is not walking through that door any time soon (and the birds of Arizona rejoice).

While Gibby was willing to concede it was an honor, it's not something he's thinking about yet. The team has an off day on March 14 and at that point he will probably begin setting up his rotation for the start of the season.

"We're going to set our rotation up the best way we think that's going to be best for our team. There's other things to consider -- lefties, righties, does guy throw hard, is he a control guy, is he a location guy. That's not something I'm focused on."

Kevin Towers talked about his two new bullpen arms acquired in the Mark Reynolds trade. While he conceded the team would miss Mark's power, he went to the "you have to give up talent, to get talent" cliché to explain the move.

Both David Hernandez and Kam Mickolio (pronounced Mick-o-lie-o) pitched last two days. According to Towers, Mickolio shows a good heavy sink in on the right-handed hitters and Hernandez has a good curve ball that "comes out of his hand fairly easy."

Clay Zavada is taking his physical today and should be in camp tomorrow. The rehab process is difficult for guys and Zavada didn't feel right last week throwing the ball according to Towers. Facing the grind of more rehab, he considered hanging it up, but with more time to think about it he decided he's going to give it a shot.

"He probably just had a 24 to 48 hour period where he had some doubts but it sounds like he's focused on coming in here and continuing the rehab process and hopefully pitching in the big leagues," Towers said.

"It sounds like he's an emotional kid anyway and he probably just wasn't feeling real good with where he was at."

Towers said the indecision is, "not going to hurt his situation with us at all." The goal with Zavada is to having him pitching by April or maybe at the tail end of spring training. He had Tommy John elbow surgery in May 2010.

"I always felt it hurts relationships and especially being new here I want the player to be focused and ready for the season and not having to worry about putting on a suit and siting in a hearing room tomorrow.

"I think it was good for both sides and we got all of our arb-eligible guys done and now we can start focusing on getting ready for the season," Towers said about the deal the two sides agreed to.

There was no discussion of signing Johnson to a multi-year deal.

Micah Owings - Man For All Seasons
Owings impressed his bosses today with his ability to look comfortable fielding at first base and his bat is still strong as ever. Despite his versatility, the priority is still on his arm where he's seen as a potential long reliever in the bull pen.

"First and foremost, I want him to have value as a pitcher. The rest is a bonus," the D-backs skipper said. That's not to say Gibby isn't intrigued at what Owings might be able to do.

"A couple of years ago I saw Lou Piniella take a pitcher out, put him at a position, then put him back at pitcher. You can do that one time during an inning."

Right now, Micah is considered to be a power right-handed bat who can hit fast balls. The next step is to see how he handles breaking balls and what he looks like at first base in game situations. He will get opportunities to play first this spring.

Just a reminder that the Diamondbacks Spring Training is very accessible to fans. Today there was an autograph session at 11:20 am and fans can get very close to where the players are working out. 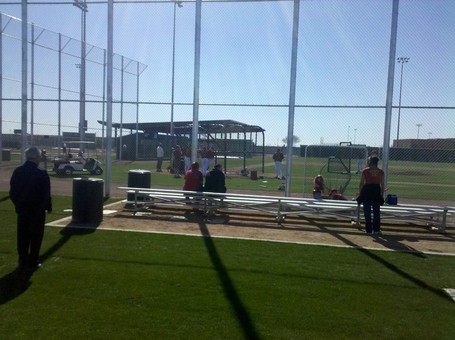