D-backs Start Spring Training With Plenty Of Questions, Just How They Want It

Share All sharing options for: D-backs Start Spring Training With Plenty Of Questions, Just How They Want It

There are seven or eight guys competing for five spots in the pitching rotation. There were six different guys named as possible first basemen. An established batting order is a distant dream and Arizona Diamondbacks Manager Kirk Gibson can't even say yet if his team will play small-ball to manufacture runs or if they will again be a power team on offense.

To say that the Diamondbacks have a lot to figure out this Spring Training would be an understatement. Some of that is a result of all the changes the team made in the offseason and lack of star power in key positions, but some of that is by design and part of the culture change Gibson and Kevin Towers are trying to accomplish.

Gibby wants players to be hungry like his was his first Spring Training when he was cut from the major league team despite leading the squad in home runs. He recalled being pissed about getting sent down.

"I hope there's some of those guys in this camp," Gibby said.

Gibson was hesitant to be too specific about what things he will do differently in his first year running camp. He didn't want to imply that his way was better then the last guy's (as he put it). He promised the team would get in shape and do some full speed work but also would have time to relax and have some laughs. He wants his team to lock in when it's time but also not work until they drop.

Some of the changes he was willing to talk about focused on things like holding runners on base, and getting more plate production from the pitching staff.

"I want guys that can bunt, that can slash, that I can hit and run with. Ultimately, that's our goal. I'm using pitching right now for the topic, but that goes for every position on the field. We want to try and get as good as we can get and have a broader sense of our responsibility at any given position," the D-backs manager said.

Ultimately, it seems that Gibson will adjust his style of play to the skill sets of his final 25-man roster instead of picking guys will skills that fit a certain mold even if they don't have the desired level of competitiveness. 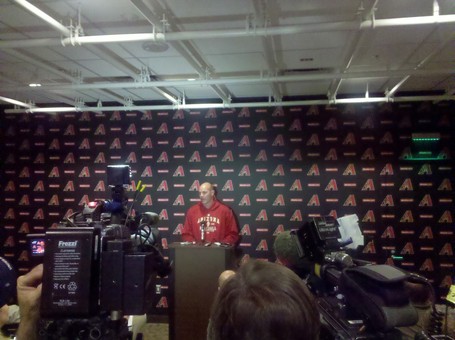