The Diamondbacks have stepped up the solar leadership from Arizona's sports teams with the addition of a practical, stylish, energy-generating project on the main plaza in front of Chase Field.

There was a time not too long ago when alternative energy ideas, and specifically solar power, were mocked by many as a waste of time and money. Not wanting to get into the politics of energy policy or the environment, lets just acknowledge that there's been a shift in general thinking recently and a big part of that is leadership from high-profile institutions in our community.

In 2008, the Phoenix Suns kicked things off with the installation of solar panels on the roof of their building in central Phoenix.

"We are not the first, but we are definitely at the forefront of this (trend)," former Suns' General Manager Steve Kerr said at the time.

Now the Suns' downtown neighbors have upped the ante with their announcement of a solar project that won't be hidden away on the roof, but will be in the most prominent part of their facility -- the main plaza outside Chase Field.

"The solar structure will not only further distinguish the D-backs' green initiatives among professional sports teams, but it will also provide needed shading near the ballpark to enhance our fan experience during the hot summer months," said D-backs President and CEO Derrick Hall.

"This innovative project will be on display when baseball fans from around the world visit downtown Phoenix in July to attend the All-Star Game at Chase Field."

The project stems from a partnership between the D-backs, Maricopa County Stadium District and local power company APS. The structure will cover 17,280 square feet above the plaza area near the ballpark's western entrances and ticket booths. Construction begins this week and is expected to be complete by May.

The structure will provide shade for fans waiting to get in the park and generate 75 kilowatts of solar power which will be fed back into the power grid. 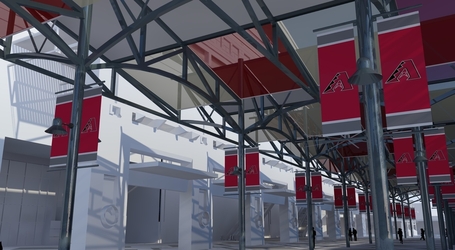 The Diamondback's preparations for the 2011 season get under way this weekend with a fan fest event on Saturday and the first day of Spring Training on Sunday when pitchers and catchers officially report. SB Nation Arizona will be there with all your Diamondbacks coverage needs.