Milwaukee Brewers manager Ron Roenicke threw reporters for a loop in his postgame news conference following his team's 8-1 loss to the Diamondbacks  in Game 3 of the NL Division Series Tuesday night.

He asked if they thought walking Miguel Montero, who had two hits prior to that at-bat in the bottom of the fifth inning, was the wrong move or the right move.

The D-backs had runners on first and second with two out at the time. Roenicke decided he'd rather have pitcher Shaun Marcum face Paul Goldschmidt than Montero, and the Brewers paid dearly for the mistake.

Goldschmidt went deep. Grand slam deep, to the opposite field, and the Diamondbacks took a 7-1 lead and effectively put the game out of reach for Milwaukee.

"That's the dilemma that a manager has, and you guys know that I don't like walking people," Roenicke said. "It bites us because we make bad pitches... I think that was the right move. But do I like it? No. I don't like it.

"There's not a whole lot of places you can go with him," he said. "Even when you make good pitches he's got a chance to hit. "

Roenicke said he was aware of Goldschmidt's penchant for big hits. He said Goldschmidt is not missing mistakes, as in bad pitches.

"If I knew he (Goldschmidt) was going to hit a home run, we wouldn't have walked him (Montero)," Roenicke said.

"The biggest thing is just helping us win the game," Goldschmidt (in photo below) said. "I had two strikes, and just trying to battle, I can't really sit on just one pitch. He ended up throwing a fastball and I'm sure he missed his spot. It ended up down the middle and I was able to get a good part of the bat on it." 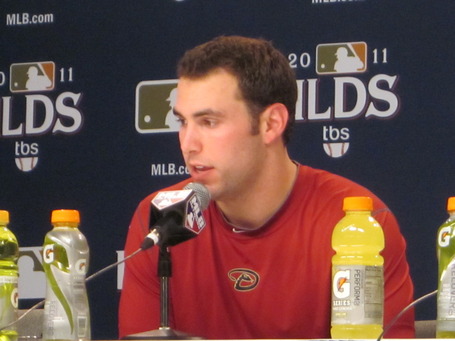 Marcum was beside himself immediately after he threw the fateful pitch. With the contact off of Goldschmidt's bat, Marcum tossed his glove in the air in frustration.