Josh Collmenter, Man Of Many Nicknames And Ridiculous Delivery

Share All sharing options for: Josh Collmenter, Man Of Many Nicknames And Ridiculous Delivery

Rookie pitcher Josh Collmenter will take the ball for the Arizona Diamondbacks on Tuesday night. He'll be pitching in the biggest game of the season for the team that had faith in his funky delivery and hairy face. Many will wonder if he can locate his fastball ("fastball") or fool Milwaukee Brewers with his change-up.

The first nickname was "Tomahawk". That comes from the obvious connection between his extreme over the top deliver and throwing hatchets in the woods of Michigan as a kid.

"That's the only thing that could ever really explain it to me," The Tomahawk said Monday when asked about the connection between chucking axes and throwing deceptive darts from the mound.

We've also heard Collmenter affectionately called "The Caveman" by his teammates. The source of this one is pretty obvious. Just look at him.

Kirk Gibson, always full of surprises, dropped a third on us.

Ferris Wheel? OK, Gibby, if you say so.

Which is your favorite Josh Collmenter nickname?

As for that funky delivery, here's what Tomahawk Caveman Ferris Wheel had to say:

"It's definitely unique, and something I didn't really discover about myself until later on in my career, not until the senior year in high school. I assumed I threw like everybody else (really? don't they have TVs in Michigan?) from a normal arm angle. When I went to college my pitching coach harnessed that and though it was special, and how deceptive it was."

One common theme is that hitters can adjust to Collmenter's delivery and "find the ball" after seeing him a few times. Brewers manager Ron Roenicke dismissed that saying:

"No, there's nothing you can do (other) than concentrate on the middle of the plate where you're trying to hit mistakes instead of trying to hit on the corner...When you have deception, it's going to always be there."

So there you have it. The deceptive arm angle is now matched with deceptive nicknaming to form the 85 MPH Fastball Super Pitcher! 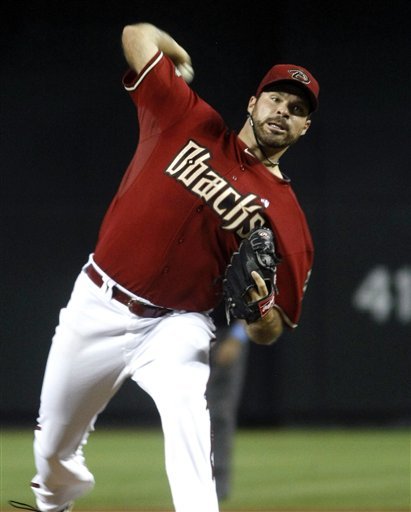