That could be the longest headline I've written in weeks but hey, it's not my fault. The Arizona Diamondbacks (18 letters) invited me and about 40 other members of the local media and various other unidentified hard hat-wearing mystery guests on a grand tour of their new Spring Training facility which happens to be named, "Salt River Fields At Talking Stick". That is quite a mouthful and a real user of precious headline real estate.

Long names aside, "The Stick" as we will now be calling it, boosted several other impressive features designed to make it a showcase for the proud people of the Salt River Pima-Maricopa Indian Tribes. 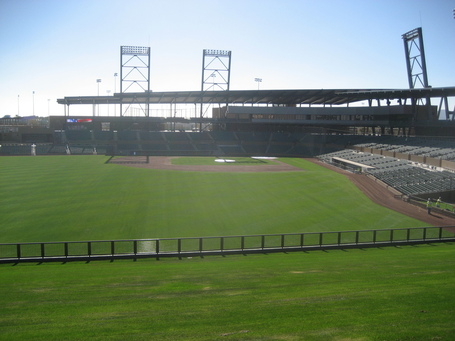 Did you know The Stick has the largest LED scoreboard of any Spring Training field? Truth. It also has the largest parking lot (3,000 spaces!) and the 4,000 lawn seats (are they called seats?) is more than any other Cactus League park. And according to Tribe Spokesman Martin Harvier is it the "first professional baseball facility built in Indian Country". Yeeeehaaa!!

All joking aside, it looks like a really cool place to watch Spring Training and as we all know, Spring Training is a blast. That's why they call this the "Disneyland of Baseball". Seriously, they called it that.

And now, on to the photo tour.

Here's a view as you walking across a bridge over a man-made stream to the main entrance behind home plate. This is actually not the main entrance for most fans however, as the big parking lot is on the other side of the field so most fans will be entering the back door in the outfield. This is just the fancy entrance and when the landscaping is done, I bet it's going to look really cool! 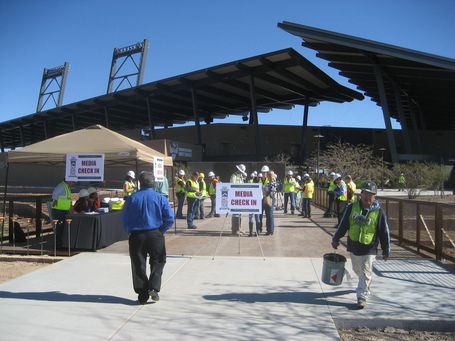 This is a view from just behind home plate. The grass, a hybrid seed we were told would hold up well in this environment and withstand frequent play, was grown at a sod farm in Eloy, AZ and planted here around Thanksgiving 2010. It certainly looks green and pretty. It was difficult not to take my shoes off and run through it barefoot. I resisted the urge.

In the background behind left field you can't miss the giant 24 X 48 foot high definition LED video board. Eat your heart out, Jerry Jones! 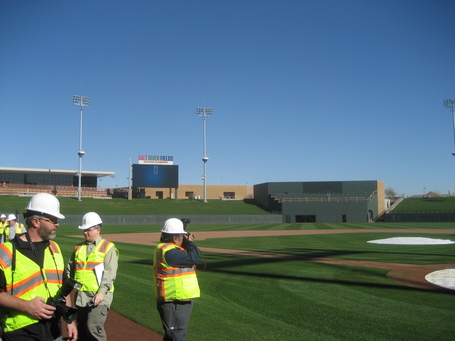 They frequently touted how this is the most interactive, fan-friendly Spring Training facility. Part of that is the really low walls separating the field from the stands. If you are sitting along the first or third base lines you might want to bring a glove...and a mask. 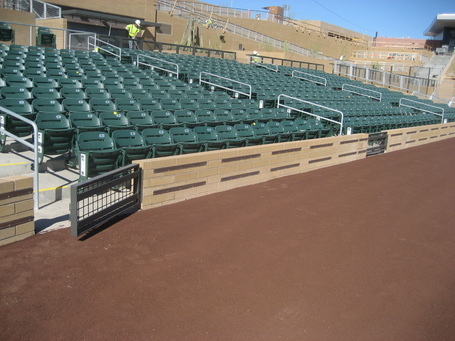 This view is from the Cold Stone Creamery kids whiffle ball play area in right field. Kids can buy ice cream and then run around and burn off the sugar while their parents ignore them and try and watch the game. A separate kids ghetto area is always a good design feature.

You will note the giant overhangs. The folks that built this Disneyland of Baseball were very proud of the fact that all the seats in the bleachers will be shaded when the games start and fully 85 percent will still be in the shade when the games end three hours later. If you are sitting in the $8 grass seats however, you are advised to bring a hat and sun screen. No shade for you....but plenty of restrooms and concession stands out there. 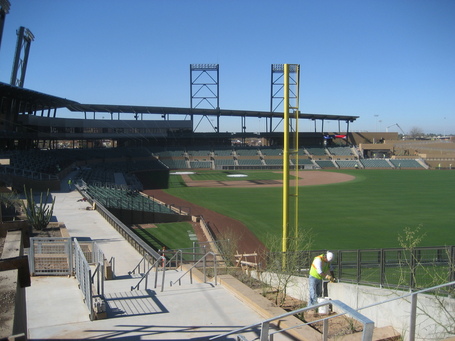 Oh hey, there's D-backs Manager Kirk Gibson sitting in a locker in the Colorado Rockies Club House! Wonder what kind of notes he's taking on his phone about his division rival? 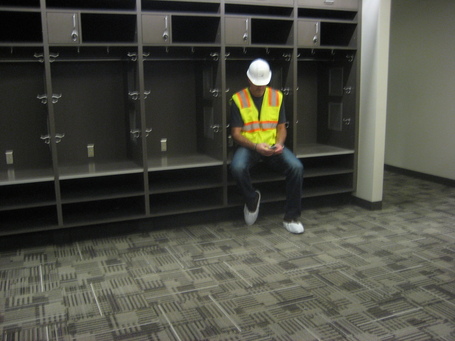 The Rockies and Diamondbacks are sharing the facility which was graciously built (and funded) by the Salt River Pima-Maricopa Indian Community. The Rockies have their facilities on the right field side of the main park and the Diamondbacks on the other side. Both have your standard set of offices, weight rooms, batting cages, and kitchens. They were very proud of their kitchens.

The two main differences between the two are the Rockies who have integrated everything between the major and minor league clubs and the D-backs who believe in keeping those pesky minor leaguers at their own end of the hall and in their own fitness facility. Clearly, the D-backs approach of segregation is the way to go. Major leaguers don't need to be sharing sweat with lesser players.

Also, the Rockies used a purple-tinged wood they said came from beetle-killed trees from Colorado. On the Diamondbacks side they used "barn wood" which had an old fashioned worn red finish. I think it's fair to assume it wasn't from any real barns although I do believe that the Rockies actually used wood from trees killed by beetles. Who would make that up?

Pro tip: This picture shows what happens when you use a flash indoors with a bunch of people wearing reflective safety vests. 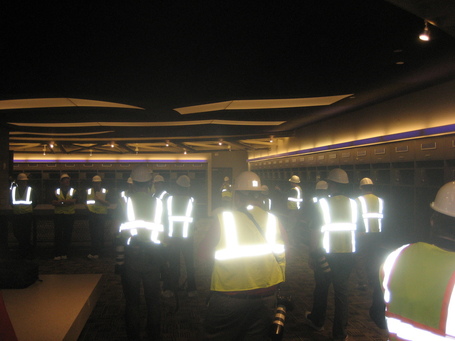 And finally, here's the Diamondbacks Club House where the players will spend a full six weeks of their lives from 6:30 or 7 in the morning all the way until 4:30 or 5 pm, according to GM Kevin Towers. With that much time and bonding opportunity, the facility had to be first-class.

Note the abundance of comfy chairs still wrapped in plastic. Also note the white booties on the feet of the media tour participants so as not to drag dirt on to the new carpets. Also note the giant "A" on the ceiling so the players never forget who they are playing for. A = Arizona => AWESOME!! 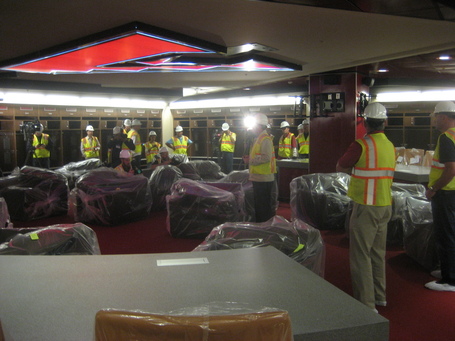 Kevin Towers insisted that this new, state-of-the-art facility will help the Diamondbacks attract free agents. Players will be able to live at home in Phoenix for eight months of the year and no longer will have to travel between Tucson and the Valley. That's not even mentioning the comfy chairs and other amenities (segregated weight rooms!) which will go a long way to helping convince free agents to sign with the Diamondbacks. 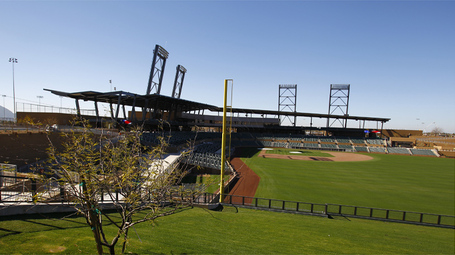