Arizona Cardinals offensive line is awful by the numbers

We look at just how bad the situation is with the Cardinals' offensive line.

Share All sharing options for: Arizona Cardinals offensive line is awful by the numbers

The Arizona Cardinals have allowed an NFL-high 23 sacks.

After a relatively quiet first three games when they gave up only six, the Cards' quarterback has hit the turf 17 times combined in Week 5 and Week 6.

The question is why?

ESPN NFC West blogger Mike Sando did a tremendous job breaking it down in this story.

The chart Sando used shows when most of the Cards sacks have occurred. 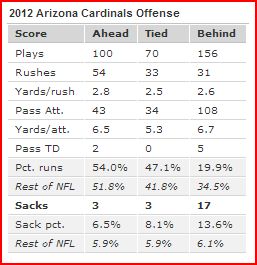 Clearly, the biggest issue for Arizona is protecting the quarterback when they are behind, but they are still below league average when ahead and tied. During those situations, it isn't nearly as crippling as it is when they trail. When you dive into the numbers from Pro Football Focus, it isn't a pretty picture either.

As a group they are the worst rated in pass and run blocking. Tackles D'Anthony Batiste and Bobby Massie are the two worst-rated at their position. Adam Snyder is the worst-rated guard and Lyle Sendlein comes in at third from the bottom for centers. Guard Daryn Colledge is the only one not graded negatively, but it's barely positive (0.6).

When looking at everything, it is hard to believe head coach Ken Whisenhunt can turn this group into even average during the season. The talent just isn't there.

Best-case scenario for the Cardinals offensive line is for the team to be able to hide the deficiencies by playing with the lead as shown in the chart Sando put together.

Cardinals fall 19-16 to Bills in overtime