The first Sunday of Week 1 of the 2011 NFL season happens to fall on September 11, a sacred day in American history. It's hard to believe, but this year will mark the 10th anniversary of those tragic events. All across the country there will be a variety of events commemorating the date and celebrating the valor and honor of those who have volunteered to defend our country.

Here in Arizona, this date always reminds of us Pat Tillman. Tillman represented everything that is great about America and while the cover-up surrounding his death were a disgrace, his life will always be deserving of recognition.

Here are the plans announced by the Arizona Cardinals for Sunday's game against the Carolina Panthers:

Prior to the Cardinals-Panthers kickoff, there will be an in-stadium ceremony that will feature a live video on the scoreboard of the playing of TAPS from Arlington National Cemetery, the unfurling of a field-sized American flag by Military, Police and Firefighter volunteers, a moment of remembrance and silence and then the national anthem performed by Grammy nominated platinum recording artist and Arizona native Jordin Sparks. 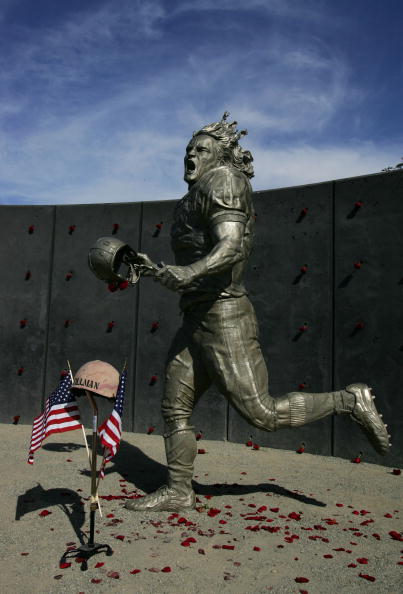 GLENDALE, AZ - NOVEMBER 12: Pat Tillman, who was killed in Afghanistan in 2004 after quitting the NFL's Arizona Cardinals to join the U.S. Army Rangers, was honored with a statue outside the University of Phoenix Stadium before the game between the Arizona Cardinals and the Dallas Cowboys November 12, 2006 in Glendale, Arizona. (Photo by Robert Laberge/Getty Images)