Big plays and key moments are what make football games. Here's 10 from the Cardinals win over the Panthers that changed the game.

Like most football games, the Arizona Cardinals season-opening win over the Carolina Panthers came down to a several key plays or moments. Both quarterbacks were very impressive in their debut performances with their new teams. Cam Newton stood tall in the face of pressure and made accurate passes while Kevin Kolb showed his ability to react to the blitz and evade rushing defenders.

The defense for the Cardinals both made plays (an interception and four sacks) and got beat deep. Despite giving up 477 total yards, Carolina was held to 21 points and none in the fourth quarter. Here are the key plays and drives of the game.

On the very first offensive possession for the season, the Cardinals showed as much promise as you could have possibly hoped for. They played like the team that led the NFL in preseason offensive yards. Watching this drive, and a few others later in the game, gives us every reason to believe this team will put points on the board all season.

The drive started with good field position (AZ 46) thanks to a solid opening defensive stand. Wells ran the ball on the first play from scrimmage this season (9 yards) and finished the drive with a seven yard run into the end zone. Kolb went 2-2 finding Todd Heap for 20 yards and Early Doucet on a big third down conversion for 16 yards.

If this drive is the blueprint for the Cardinals offense, there's a lot to be excited about. A solid mix of run and pass with Kolb efficiently spreading the ball around.

On the very next possession after the Cardinals scored, Cam Newton read the corner blitz and found Steve Smith wide open on the left side. On third and seven, the Cardinals were in a nickel package with three cornerbacks. They lined up two DE's (Dockett and Campbell) in two point stance and brought two linebackers to the line all on the right side of the ball. One linebacker on the left.

When the ball was snapped, DE Campbell dropped back in short coverage over the middle as did the linebacker on the left side (Porter). This left the rush all coming from the left side, including CB Peterson who broke from press coverage on Smith and rushed. Docket wheeled around to the back side to contain Newton should he try and break the pocket and run to his right.

In the end, this scheme only ended up bringing four rushers against six men the Panthers had in the pocket to protect Newton. The result was no pressure on the QB so he was easily able to find Smith streaking down the left side. 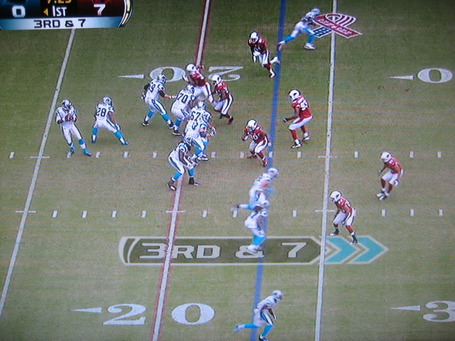 Smith got well behind safety Kerry Rhodes and with Adrian Wilson also sucking in, there was no left to stop the touchdown. According to coach Ken Whisenhunt, Wilson was supposed to roll over the top and provide help to Rhodes. 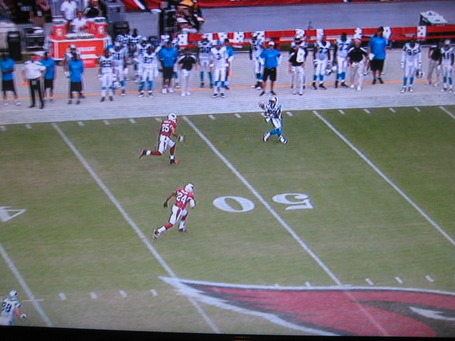 The Cardinals once again engineered an excellent drive that went from their own 20 to the Panther's four-yard line. The drive included four rushes and four passes with Wells getting the ball three times with six yards gained on each run. Kolb went 4-4 for 36 yards finding Heap (20 yds), Roberts (17 yds), Doucet (19 yds) and Stephens-Howling (2 yds).

It was another picture perfect drive until the fumble. The play started at the Panthers four-yard line on second down and goal. It was great call with Kolb pitching the ball to Wells who had the entire left side of the field open with OL Levi Brown and FB Anthony Carter in front of him blocking. It was an easy six points and Wells said after the game he knew it was a touchdown immediately.

Unfortunately, the pitch from Kolb was just a bit behind Wells and he likely took his eyes off the ball and it bounced off his fingers. A touchdown here changes the game. 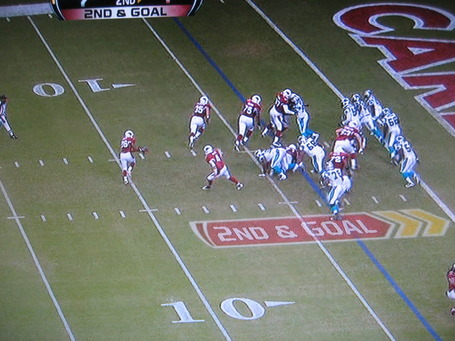 On the very next drive after the fumble, the Cardinals once again marched down the field on a drive that went 58 yards on nine plays. The drive was balanced with four runs and five passes (four completions). The Cardinals got to the Panther's five-yard line before a penalty backed them up 15. Feely missed the field goal that would prove crucial in this tight game. Feely was 14-14 in kicks inside 39 yards in 2010.

On second and four with 30 seconds left in the half, Cam Newton was hit as he released the ball by CB Richard Marshall who came on a delayed blitz. LB Daryl Washington jumped the receiver and picked the pass. The play was reversed with a roughing the passer call.

The replay showed Mashall made contact just a split second after the ball left Newton's hand. Marshall hit the QB with his shoulder and not helmet. This was a very close call and resulted in a first down and ten extra yards. 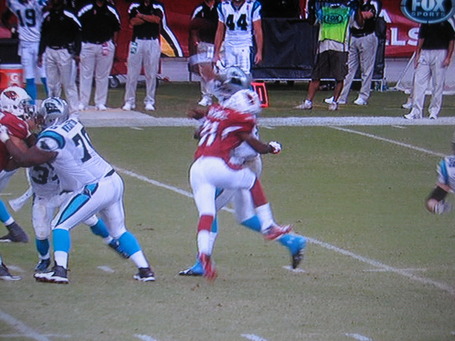 With just 13 seconds on the clock, Newton lobbed a pass to Smith in end zone for a 26-yard touchdown. Peterson had good coverage but Smith just won the ball in the air.

Washington had his interception in the first half reversed on an iffy call. He came right back early in the second half and grabbed another one. The Panthers had a first and 20 after a holding call and lined up in the shotgun. The Cardinals rushed just three defensive linemen and a linebacker and had no pressure on Newton.

Washington jumped the route and cut in front of the pass intended for Smith and picked it clean and returned it 16 yards before being tackled by Newton.

On the first play after the interception, the Panthers blitzed seven guys. Kolb read it perfectly and avoided an edge rusher to buy enough time to lob it to TE Jeff King who was wide open on the blitz. The completion went for 48 yards with all the credit going to Kolb for reading the blitz, avoiding the pressure and making the pass. 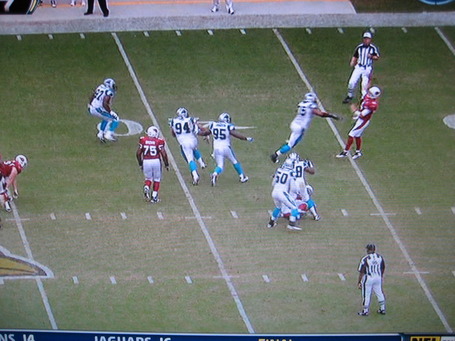 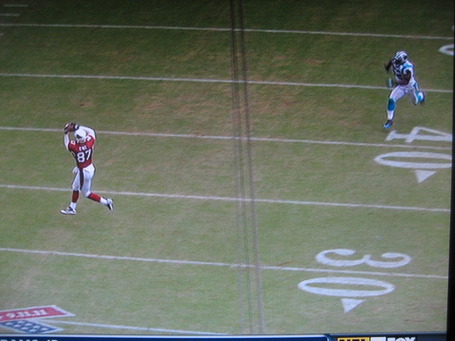 Coming right after the Cardinals scored on the throw to King, Newton put together an 80-yard drive that was his best of the game. Newton completed three passes for 78 yards. The first off his back foot facing pressure on a third and 12 blitz. The second to TE Jeremy Shockey and the third a beautiful stop route by TE Greg Olsen. Newton ran it in for the touchdown from one yard.

Looking back at this drive, it's hard to blame the Cardinals defense. Newton beat the blitz and found his tight ends in single coverage with great passes and catches. This touchdown would be final points for the Panthers and gave Carolina a 21-14 lead with under six minutes left in the third quarter.

This play speaks for itself. There will come a point where teams simply stop kicking the ball to Peterson.

The quarter started with a Carolina possession that began on their 20 and went 40 yards in in over five minutes on 10 plays. It was a solid ball possession drive by Carolina but facing a third and 11, the Cardinals blitzed again but this time had great coverage down field and were able to sack Newton.

Arizona tied the game on their next possession when Kolb beat the blitz and found Doucet slanting across the middle in the space the blitzing linebackers left open. Doucet beat the safety and ran it for a 70-yard play. 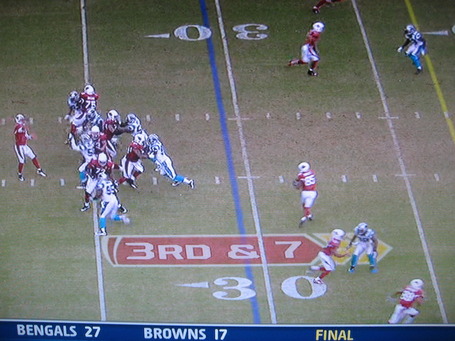 The next two defensive series were probably the best of the game for Arizona. Carolina was forced to punt on two-straight possessions with one resulting in Patrick Peterson's game-winning punt return touchdown.

The first drive went 32 yards and ended again on a third down blitz sack. The next went 16 yards with Newton going 2-2.

Arizona got the ball back on their own 11-yard line with 5:01 left in the game and 28-21 lead. After two short runs, Kolb finally found Fitzgerald for a long pass, 49 yards down the sideline. The Cardinals weren't able to get another first down which proved critical.

With the lead in the game, the Cardinals tried to run the ball, but Wells only got eight total yards on four rushing attempts. Perhaps he was worn down by this point in the game but the Panthers defense also stepped up.

On their final drive, Carolina almost tied the game. They started on their own 17 with 2:20 on the clock and quickly went down to the Cardinals 11. The drive was helped by two penalties, roughing the passer on Haggans and Joey Porter offside on fourth down that gave the Panthers a final shot.

Carolina went to a short pass underneath to Goodson but Paris Lenon was able to wrap him up and prevent a first down. It was a game-saving tackle by the Arizona captain. Ultimately, the Panthers had the ball four times in the final quarter and didn't score.