Rob Housler Working To Be An 'Every Down' Tight End, Has Ways To Go

Share All sharing options for: Rob Housler Working To Be An 'Every Down' Tight End, Has Ways To Go

Arizona Cardinals head coach Ken Whisenhunt said this week that he was pleased with all the rookies from the 2011 NFL Draft. He felt they all have the potential to be solid NFL players which is not always the case with an entire rookie class. One guy that's caught the attention of both the coaching staff, fans and media observers is third-round pick Rob Housler, a tight end from Florida Atlantic.

Housler was known coming out of college as a good receiving tight end and he's lived up to that reputation in both practice and his first two preseason games. He's totaled seven receptions for 86 yards in those first two appearances in a Cardinals uniform.

Whisenhunt agrees that Housler has been impressive in the passing game and has done some things instinctively which are "through the roof". That is the stuff that's easy to notice according to Whisenhunt, a former NFL tight end himself.

"What Rob's got to do is continue to work on some of his things in the run game, some of his blocks," Whisenhunt said. "He's working hard. I like his make up as far as his willingness to stick his head in there and try and get it done right."

Housler doesn't dispute that he's got work to do on the blocking part of his game, "It's a work in progress. It's a big adjustment between the collegiate and professional level."

Rob has a great NFL tight end in Todd Heap to learn the passing game from and another veteran in Jeff King who's known for his blocking. Housler said he's trying to learn from all the veterans and improve every aspect of his game.

"You want to be an every down tight end. You don't want to be confined to one side of the game or not. I think that's what everyone's goals are. We all go in there with the goal to be on the field as much as possible. The only way you can do that is to be good at what you do which is blocking and catching."

Housler pulled up after catching a ball in practice on Tuesday and had his upper leg wrapped in ice. He didn't fully participate in the team's walk-through Wednesday morning. He said it's nothing serious and being held out was only precautionary and a normal part of getting banged up in training camp. 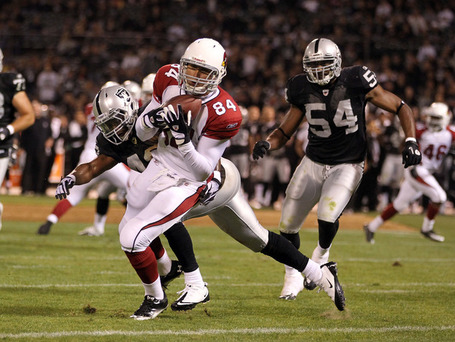 OAKLAND, CA - AUGUST 11: Rob Housler #84 of the Arizona Cardinals catches a touchdown pass against the Oakland Raiders at O.co Coliseum on August 11, 2011 in Oakland, California. (Photo by Ezra Shaw/Getty Images)