The chemistry between the Arizona Cardinals new starting quarterback Kevin Kolb and the incumbent All-Universe wide receiver Larry Fitzgerald is no laughing matter. How these two get along on and off the field will be important to the success of the football club that's paying both of them a lot of money and positioning itself for the privilege of renewing Fitzgerald's contract to pay him even more.

It's early yet and due to league rules preventing Kolb from practicing until August 4, the duo has yet to hook up for one pass on the field. That hasn't stopped them from getting to know each other and from the early signs, things are positive.

It's always good when guys (and yes, this applies more to guys than gals) are comfortable enough with each other to make jokes at the other's expense. This kind of clowning is a crucial sign of good team chemistry and so when we see both Fitz and Kolb taking shots at each other in their various media sessions, Cardinals fans should be encouraged.

"He's trying to get me to do some things I don't want to do," Fitzgerald said after Monday's morning practice. "We sit right next to each other in meetings but he's a dipper, he's a chewer. He tries to get me to put a little bit in my lip but I won't do it, man."

"He'll call me up on the phone, 'Fitz, I was looking at this play, what where you thinking' and I'm like, 'Kevin, I'm sleeping, man.' He's just that kind of guy."

"He's a liar but I appreciate him taking up for me," Kolb replied in his own press conference an hour later when asked about Fitzgerald's comments.

Of course, it's not all fun and games between these guys who will rely so heavily on the other for success on the field. Both men had only positive things to say about their counterpart.

"I've been here, what, 48 hours, and I'm already expecting him when the ball goes up he's going to make the catch every time. It's almost unfair to him," Kolb said after remarking about several spectacular catches Fitz has made.

Kevin agreed that like Kurt Warner before him, he's going to have to adjust his definition of "open" when it comes to throwing the ball to Fitz. But it's not just Larry's talent on the field that's impressed Kolb. Kevin talked about the way Fitz handles himself and how hard he works.

"I think it should tell every young receiver that you don't have to be a diva to be a great player...everybody should look up to that, not only receivers."

Fitz was gushing as well about his new QB, "We're having fun in the meeting room but he's (Kolb) learning things very quick. He's the son of a coach and so he's a football guy through and through...He's always thinking football, he wants to be great, he wants to be successful and those kind of players always do well." 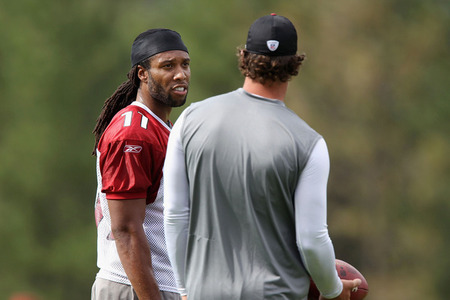