Braylon Edwards Coming To Cardinals, Kerry Rhodes Has The Scoop

Share All sharing options for: Braylon Edwards Coming To Cardinals, Kerry Rhodes Has The Scoop

The big rumor floating around Cardinals practice Monday morning centered on free agent wide receiver Braylon Edwards. The highly unconfirmed chatter is that Edwards, who had already been rumored as a Cardinals' target, was in Arizona already. To get more info on the Edwards situation, SB Nation Arizona spoke with Edwards' good friend, safety Kerry Rhodes.

Asked specifically about the rumor that Edwards was already in Arizona, Rhodes smiled and said, "I can't comment on that one yet."

Note the use of the word "yet".

Rhodes made the rumor even a bit more titillating when he added, "Just stay tuned, check on twitter."

Rhodes might have also let a little something slip with his choice of words when asked about the idea of reuniting with his buddy from the NY Jets, "I'll be happy. He'll come here and give this team a weapon. He's one of the best receivers in the game."

Then again, he also used a more speculative framing in another comment, "I hear that we're in discussions and talking with him. If he comes here he'll be a great addition."

One thing Rhodes was clear about was his desire and involvement in making it happen.

"I may have, I may have gotten involved a little bit. I may be doing a little "Coach K" recruiting right now to try and get that done," Rhodes said about the role he's playing in the recuitment of the talented free agent wide receiver. 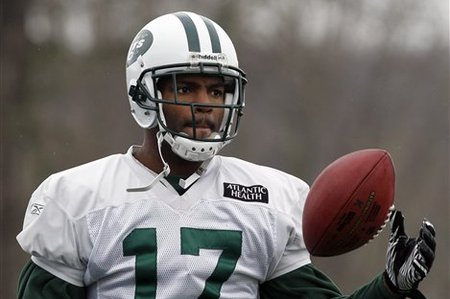