The Arizona Cardinals had a busy day on and off the field. As we covered all the Sunday action off the field, the team put on the pads and spent two-hours of a partly sunny Flagstaff afternoon running through a variety of drills. It wasn't always pretty but at least tomorrow the complement of players will include all the team's rookies who are now signed and in camp. Patrick Peterson even took the podium for a 6:00 pm press conference.

Peterson is understandably excited to get the contract stuff out of the way and practice on Monday for the first time in a Cardinals uniform. It won't, however, be the first time he's lined up opposite Larry Fitzgerald. Like many players this offseason Peterson worked out with Fitz in Arizona during the summer.

"He told me he's going to get me better," Peterson said. Guarding the best receiver in the league in practice will prepare certainly help prepare the rookie for NFL Sundays.

Peterson did express some disappoint in not getting the chance to learn from Dominique Rodgers-Cromartie who also was a Cardinal's starting cornerback his rookie year but he understands it's part of the business and he can learn from newly-signed six-year NFL cornerback Richard Marshall.
"Not really. I still have to come in here and make plays," Peterson said when asked if the loss of DRC put any additional pressure on him.
Mostly though, Peterson is looking forward to doing his thing -- "Make interceptions."
Coach Ken Whisenhunt is excited about the signing of veteran TE Todd Heap and is happy to have guard Deuce Lutui back in the fold. Heap adds another element to the offense and Whisenhunt commended the front office for filling a need the team identified at that position.

As for practice,  "It was good to get out here on the field in pads and see some of these guys. I like the intensity and effort but a lot of the little things you're seeing -- guys lining up offsides, missing the count, being in the wrong place, making mistakes.  A lot of the things you see early in the offseason that you get your players comfortable with you're going to have to fight through."

Linebacker Clark Haggans agreed that this training camp has been a challenge, "It's a lot different than what I've seen before with all this activity. We've crammed six months worth of stuff in four or five days. It's flurry. It's kind of exciting especially for you guys just to report. There's news happening every 10 minutes something big and breaking."

The Cardinals will have two practices on Monday with the early work out (9:05 am) being a walk-thru only. (Full practice schedule here.)

For more on the Cardinals, check out Revenge of the Birds. 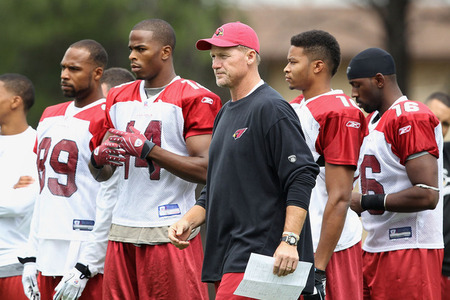