Just about three hours before the Arizona Cardinals took the practice field for the first time in the 2011 NFL Season Training Camp head coach Ken Whisenhunt addressed the media in a cozy meeting room near the dinning facility on the campus of Northern Arizona University. Aside from a light rain, it was a shame to even be inside at all and hopefully, that rain will clear in time for practice.

"Get through it without rain," Whisenhunt responded when asked about his goals for Saturday afternoon. Should the rain come back (it's stopped now) the team will move inside the NAU Walkup Skydome which will prevent the fans from watching their team work out.

The town of Flagstaff is thrilled to have camp here again and the fans that come to get close to the team are happy the lockout is over. Whisenhunt appreciates that relationship as much as anyone.

"It's a very important relationship between our fans and our players and obviously, this is a great venue for that to happen," Coach said.

The first practice itself, as with many things at this training camp, will be a little different due to the lockout.

"When we go out on the field where we go for our individual drills, where we line up for stretch, where do all those things -- we haven't done that. We've always already had the opportunity to do that. Getting through this practice in a semi-organized manner and able to run plays and play defense and really getting a feel for getting started."

Making the confusion even more...confusing...is the roster situation.

Whiz wasn't even sure how many players he had in camp and how many would be available to practice on Saturday. He guessed there were about 70 total players but many veteran free agents like Kevin Kolb and Daryn Colledge won't be able to take the field for several more days.

Colledge for his part, admitted that he had a lot to learn in a short period of time. The biggest issues for him are communication, terminology and chemistry on the O-line. The focus for his training camp will be getting with center and tackles and making sure everyone is on the same page.

"For me, it's going to be getting rid of the habits of what I would do to make adjustments to defenses in my old game and make adjustments here and make sure everybody's on the same page. Like I said, there's dude's behind us who's lives are probably on the line, I need to be doing that right," Colledge said.

A running theme for this training camp will be how quickly the team overcomes the challenges that come with the lockout and how fast they can get on the same page and start working on the more advanced skills needed for the season. Whisenhunt puts a lot of burden for that task on his veteran players who will have to help the coaching staff show the new guys how the Cardinals do their business.

For more on the Cardinals, check out Revenge of the Birds. 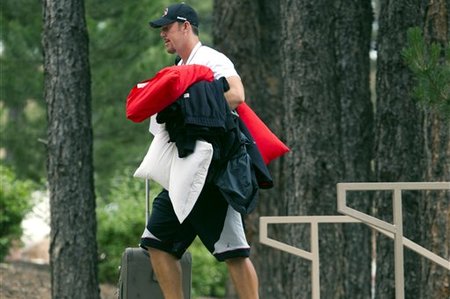