A tired-looking Arizona Cardinals general manager and head coach took the podium Thursday afternoon and answered questions about the trade for quarterback Kevin Kolb. Both Rod Graves and Ken Whisenhunt expressed their excitement about the move but also were clear in their sadness at losing Dominique Rodgers-Cromartie to the Philadelphia Eagles in the deal.

"When it was first initially talked about, I said 'no'. I want to be clear, we were not shopping Dominique. That was something that was a very tough decision," Whisenhunt said, echoing a similar sentiment from Graves who talked about how difficult it was to give up a good football player who is well-liked and gregarious and fun to be around.

"We're going to miss him but we also thank him very much for his contribution to our team," Graves said.

The decision, while difficult, was one the team felt they needed to make despite the price. Obviously, the Cardinals needed to fill the quarterback position and as Whisenhunt said, what will matter is how many wins the Cardinals end up with and how Kolb performs.

"There's no guarantees in this business," Whisenhunt stressed.

Because of the compressed time frame for evaluating talent and making this kind of move, the Cardinals relied on information they had gathered about Kolb when he first was eligible for the draft in 2007. They looked back at the discussions they had with him during the NFL Combine to help assess his leadership abilities and then also relied heavily on input from Eagles' coach Andy Reid who spoke highly of Kolb.

Kolb will report to Arizona Friday to take his physical. There's no firm word yet on when he will be eligible to practice although it's believed that won't be until August 4 under the NFL timeline. Whisenhunt acknowledged the challenge of the limited time to prepare for the season but felt Kolb's experience and reputation as a "gym rat" would help speed things along.

For more on the Arizona Cardinals and their new quarterback visit Revenge of the Birds. 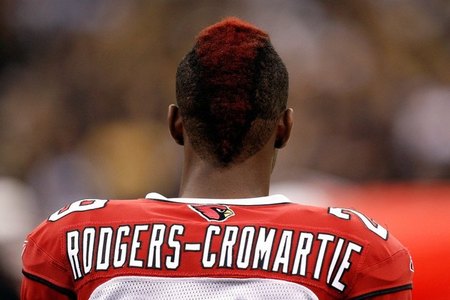 Dominique Rodgers-Cromartie #29 of the Arizona Cardinals red mohawk against the New Orleans Saints during the NFC Divisional Playoff Game at Louisana Superdome on January 16, 2010 in New Orleans, Louisiana. According to reports on July 28, 2011, the Cardinals have traded Rodgers-Cromartie and a second round draft pick to the Philadelphia Eagles for quarterback Kevin Kolb. (Photo by Ronald Martinez/Getty Images)

Part 1 of the Ken Whisenhunt and Rod Graves press conference: