With so many free agents to sign in so little time it was inevitable there would be some losses and for the Arizona Cardinals it seems that the first to go will be wide receiver Steve Breaston. According to a report from the Arizona Republic's Kent Somers, Breaston is getting a lot of attention in free agency and will not be returning the Red Birds.

azcentral.com blogs - Kent Somers - Steve Breaston won't return to the Cardinals
An unrestricted free agent, Breaston has received interest from numerous teams, including Arizona, which drafted him in the fifth round in 2007.   But Breaston has apparently received more lucrative offers, and the Cardinals are out of the running for his services. The Chiefs are believed to the favorite to sign him.

Breaston's role increased last season once Anquan Boldin was moved to Baltimore. He finished the season with 753 yards from scrimmage, two touchdowns, 47 receptions in 13 games played.

According to Somers, the Cardinals will try and replace Breaston's role as the second receiver with Early Doucet (a restricted free agent) and / or Andre Roberts who showed some flashes in his rookie season. The Cardinals also could look for a veteran wide receiver in free agency.

If this report turns out to come true, we wish Stevie B all the best. We'll miss his entertaining food-related tweets.

Twitter / @SBreaston15: The early bird gets to McDonalds breakfast...

Kansas City has been named as a possible landing place for the escaped bird Steve Breaston. He could reunite with his former offensive coordinator and current Chiefs head coach Todd Haley.

For more on the Arizona Cardinals free agency and quarterback situation, stay tuned to this StoryStream and visit the Revenge of the Birds Blog. 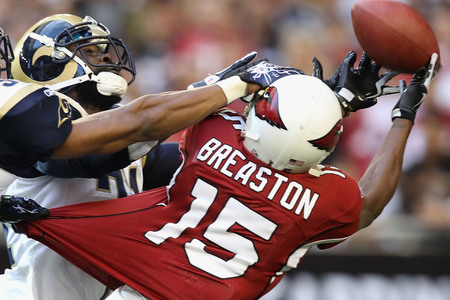 GLENDALE AZ - DECEMBER 05: Wide receiver Steve Breaston #15 of the Arizona Cardinals is unable to catch a long pass against the St. Louis Rams during the NFL game at the University of Phoenix Stadium on December 5 2010 in Glendale Arizona. The Rams defeated the Cardinals 19-6. (Photo by Christian Petersen/Getty Images)