Darnell Dockett Ready For Camp, Hopes Teammates Are Too

Share All sharing options for: Darnell Dockett Ready For Camp, Hopes Teammates Are Too

Darnell Dockett can be a funny guy at times but he was all business on his first official day back at the Arizona Cardinals Tempe training facility. He got in a workout and caught up on things with his coaches. When asked about his team the game face came on.

"When you finish last place in the division, you know you have a lot of work to do and I feel like we're a couple of steps behind and the only way we were going to be able to do that was to have a great offseason but that didn't happen. Right now we just have to focus in and hope that we have enough mature guys to go on the field and get it done and play catch up," Dockett said.

He sees the key to a successful camp resting on team leaders like himself who need to make sure the players stay focused and don't fall back on excuses. According to Darnell, after seven months off there's no reason for guys complaining about being tired or sore -- "Just get the job done."

While he says that he's in shape and ready to get back to work, the defensive tackle is not so sure that everyone will be.

"Just hoping that my teammates have been taking the initiative to get the job done and been working. That's the biggest thing that I was concerned about was everybody else doing their job, everybody staying in shape."

The most important sign that Darnell is ready was revealed by this answer,

"My alligator's in Florida. I miss him too. I was going to ask coach can I bring him to training camp but I was pretty sure he was going to say no so I just wanted to save myself the hassle."

No alligator. All business. Darnell Dockett reporting for duty. 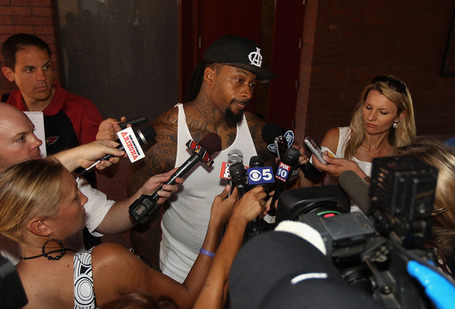 TEMPE, AZ - JULY 26: Defensive tackle Darnell Dockett #90 of the Arizona Cardinals speaks to the media as he reports to the team's training center facility on July 26, 2011 in Tempe, Arizona. (Photo by Christian Petersen/Getty Images)