If you believe all the trade rumors cornerback Dominique Rodgers-Cromartie has already been dealt to the Philadelphia Eagles for quarterback Kevin Kolb. Of course, trade rumors and actual trades are two completely separate things but that won't stop us in the media from speculating and no one speculates better than sports talk radio with their hours and hours and time to fill.

In an interview with a Philly show, hosts Anthony Gargano and Glen Macnow rolled out the full cheese steak welcome for DRC starting with a "happy birthday" to his mom and ending with an offer to secure his preferred jersey number.

For his part, DRC did a great job walking the line and avoid an Amare Stoudemire-like situation where he tells every city he talks to how much he'd love to play there. He understands that he might be dealt to Philly and wants to get off to a good start with the fans should that happen.

He's also smart enough not to take the bait when asked about playing in Arizona, which according to the Philly radio host, "is not a great football town...you have the opportunity to come here to a team which is, we think is a real Super Bowl contender and a town that's passionate about it's football."

Note: Screw you, Philly sports talk radio guys. Arizona fans are passionate about their football (as long as the roof is closed if the temperature is under 60 or over 80 degrees). And Super Bowl contender...really?

"As far as just the atmosphere itself, yeah, that would (excite me)," DRC said with diplomacy. "But you know, I was drafted by the Cardinals so that's where I really started at. But if they're talking about trading me, I can't do nothing about that because it's a business."

Is Kevin Kolb worth trading Rodgers-Cromartie? Is that deal even on the table? We'll find out the answers to these questions and more in the next exciting episode of, How The NFL Turns. Also keep up on things over at Revenge of the Birds. 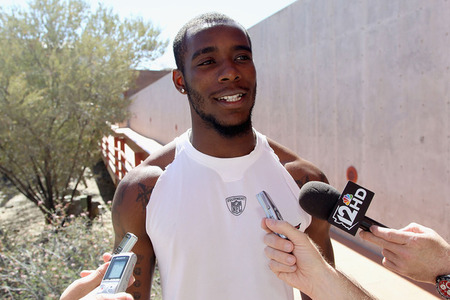 TEMPE, AZ - APRIL 29: Cornerback Dominique Rodgers-Cromartie #29 of the Arizona Cardinals talks with the media as he leaves the team's training center on April 29, 2011 in Tempe, Arizona. (Photo by Christian Petersen/Getty Images)