By the time the Arizona Cardinals actually have a quarterback for the 2011 NFL season, every QB in the league from Sam Bradford to Cam Newton to some retread like Derek Anderson will have been rumored to be coming to Arizona. The latest is from a source that says the Cardinals have had preliminary talks with the Denver Broncos about Kyle Orton.

Orton could be available now that John Elway has jumped on the Tim Tebow bandwagon. "He has the opportunity to be a great quarterback and leader," Elway said of Tebow recently on the Mike and Mike show.

Of course, Broncos coach John Fox who has to actually live the results sees it a different way.

"As far as I'm concerned, he's under contract and he's the starting quarterback for the Denver Broncos," Fox said of Orton, "Kyle Orton is our starter."

One could see why the Cardinals would pick up the phone and ask given the mixed messages coming out of Colorado. And before Cardinals fans panic at the idea of Orton being "the guy" under center that the team trusts to return the Red Birds to the Super Bowl, rest assured that he's not Plan A according to this rumor.

A source tells 3TV's Tim Ring, the discussions would not be categorized as serious but the Broncos believe the Cardinals have an interest in Orton as a "Plan B" if they can't work out a deal for Philadelphia Eagles' quarterback Kevin Kolb.

Over his five-year career that spans time in Chicago and Denver, Orton's record is 32-29 and his passer rating over the past two seasons is 87. 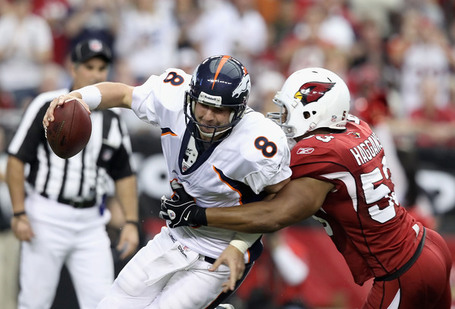 GLENDALE AZ - DECEMBER 12: Quarterback Kyle Orton #8 of the Denver Broncos is sacked by Clark Haggans #53 of the Arizona Cardinals during the NFL game at the University of Phoenix Stadium on December 12 2010 in Glendale Arizona. The Cardinals defeated the Broncos 43-13. (Photo by Christian Petersen/Getty Images)