Patrick Peterson hasn't even arrived in Arizona and he's already making news in a not-so-flattering way. The 20-year-old NFL Draft pick stud was seen with famous cougar, Joumana Kidd. Joumana, 43, is the ex-wife of point guard Jason Kidd who built quite a reputation in Phoenix when Jason was wearing a Suns' uniform.

According to this report, "the two were spotted getting CUDDLY at the Player's Association ROOKIE party . . . and they LEFT together."

Patrick, come on buddy! If this is the kind of decision making we are going to get from the fifth overall pick then Arizona sports fans are in for a long and painful few years. We know that he had an extremely low Wonderlic score, but is there anyway that Peterson thought that leaving a party with Joumana Kidd was a good idea? 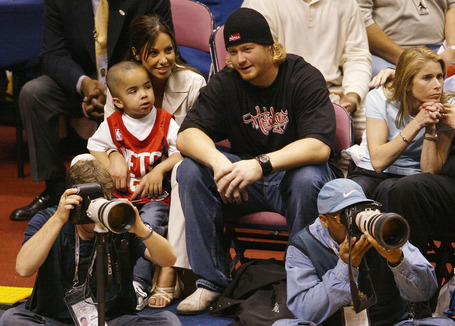 Just as a reminder, Joumana Kidd forced herself into the spotlight when in Phoenix and was involved with Jason in a domestic violence incident that was part of the reason Kidd was traded to New Jersey by the Suns.

The couple filed for divorce in 2007. Peterson might want to review some of this material before hooking up (allegedly) with Joumana again.

In the dissolution papers, filed in state Superior Court in Bergen County, Kidd accuses Joumana Kidd of physically and mentally abusing him, threatening to make false domestic violence complaints against him to police and of interfering with his relationship with his children. "The defendant's extreme and unwarranted jealousy and rage has left the plaintiff concerned about her emotional stability," the papers say.

Let's just hope this rumor isn't true because the prospect of the Cardinals' draft pick making such a questionable decision is too much to take.