There were 12 quarterbacks taken in the 2011 NFL Draft over the past few days. Starting with Cam Newton as the first pick, six of them went in the first or second round. And that's without Andrew Luck who opted to stay in school another year as opposed to be taken first by Carolina. In the 2010 NFL Draft there were just three quarterbacks taken in the first two rounds: Sam Bradford (1), Tim Tebow (25th) and Jimmy Clausen (48).

Of all these quarterbacks, some will certainly fail to pan out but that won't be known until the NFL season (hopefully) gets underway in the fall. With the lockout back in place, this year's draft happened before free agency which turned things on its head.

Teams that needed a quarterback faced the choice of reaching for one in the draft like the Tennessee Titans did picking Jake Locker eighth overall, or gambling on trades and free agency once the NFL opens back up for business. The Arizona Cardinals ignoring Blaine Gabbert with the fifth pick in favor of Patrick Peterson did just that. 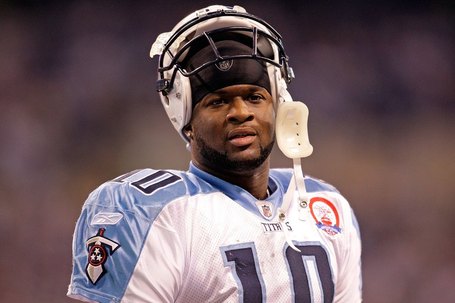 Vince Young #10 of the Tennessee Titans looks on during the NFL game against the Indianapolis Colts at Lucas Oil Stadium in Indianapolis, Indiana. Young is one of several quarterbacks available this offseason. (Photo by Andy Lyons/Getty Images)

We don't know if the Cardinals would have taken Andy Dalton or Colin Kaepernick with the sixth pick in the second round since both those guys were already off the board.

That leaves teams like the Cardinals eyeballing a limited number of possible quarterbacks. Free agent Marc Bulger has already been rumored to have an "understanding" in place with Arizona although no one is going to confirm that now.

Other options include Kevin Kolb of the Eagles who most certainly could be had in a trade. None other than ESPN's Mel Kiper suggested the Cardinals could use one of their extra cornerbacks as bait in such a deal. Kyle Orton from Denver is out there as an option but the Bronco's didn't draft a QB and it's hard to imagine John Elway thinking that Brady Quinn or Tim Tebow can do the job better than Kyle.

Carson Palmer's situation in Cincinnati and Vince Young being booted out of Tennessee put both of those guys in play as well. It seems that either could be had with little given up but both bring baggage to the table.

We'll have to wait and see how things play out once the lockout is finally lifted, but my money is on Bulger for the Cardinals. Ken Whisenhunt reportedly wanted him last year and he certainly likes him some veteran quarterback presence.