Share All sharing options for: Sam Acho Radio Interview: Not Your Normal Jock

Sam Acho, the Cardinals fourth round draft pick out of Texas, is a guy the team hopes will turn out to be a draft steal. He was slotted by most experts as second or third round pick but fell to the Cardinals for reasons that really aren't yet clear. In a radio interview with an ESPN station in Austin, TX, Acho admitted to being disappointed at not going sooner and said that several teams said they would take him and didn't.

Acho comes across in the interview as a bright guy who's very committed to his faith and helping the birthplace of his parents. For the past 18 or 19 years, Sam's parents have been making trips to Nigeria to deliver medical aid and other support to their homeland. Sam, who was born in Dallas, TX,  said he's made the trip several time himself and always comes back changed. 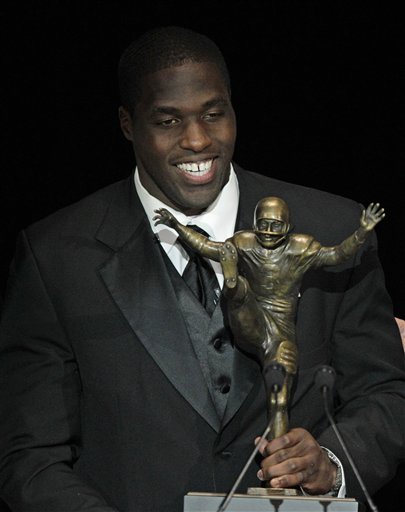 Seeing the poverty and conditions in Nigeria has given him a "different perspective on life" and inspired him to work hard both in football and in the classroom.

Acho's 3.60 GPA at Texas is evidence enough of that as is this award:

Acho said he was thrilled to be drafted by the Arizona Cardinals. He's excited about coming to a team that in the Super Bowl just a few years ago and for the opportunity to learn the outside linebacker position from veterans like Joey Porter and Clark Haggans.

Despite the lockout, Acho is in Phoenix now working out with some of his teammates on the Cardinals defense.

Couldn't have found a better fit than Arizona. In Phoenix working out with teammates.

Here's a link to the full interview. If you listen to the end you will hear Sam recite a portion of The Canterbury Tales in Olde English. Not exactly would you expect to hear from an NFL linebacker.