Arizona Cardinals Draft Grades From A To Inc.

Share All sharing options for: Arizona Cardinals Draft Grades From A To Inc.

The 2011 NFL Draft is officially over and it's well past the time when pass judgement on all the decisions made and hand out draft grades. The Arizona Cardinals walked away with eight picks over the three day draft extravaganza. From 5th overall Patrick Peterson to the guy taken just five spots before Mr. Irrelevant, DeMarco Sampson.

You can read the fine grades earned by the Cardinals from expert Mel Kiper, and surly everyone else and their brother will be publishing their draft grades as well, but we guarantee none will be more accurate than the grades handed out by our staff here today. 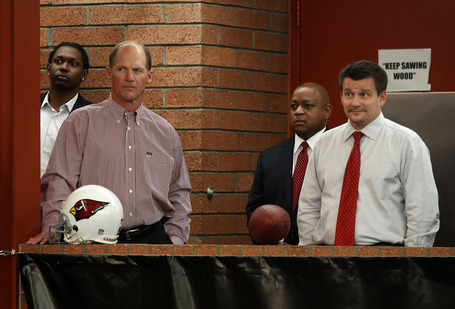 We begin with the guy who spent seven years as a newspaper beat writer covering the NFL, Jose Romero.

My first thought after the Cardinals completed the draft and I looked at the eight new players was, after Patrick Peterson's name at the top, who are these guys?

I'm not the most avid college football follower but I like to think I know a little something about it. None of the names after Peterson stood out to me at all, so the only thing I can say is that no doubt the Cardinals scouts and player personnel department did a lot of work to come up with the best players per round on their draft board. Because only they, and the most serious of analysts, know who these guys are and how good they have the potential to be.

Clearly the running back spot is one of major concern. It's safe to say the Cards don't have a clear-cut starter at that spot so Ryan Williams could get every chance to win the job.

It looks like the team sought to create some competition at tight end, too, a position that hardly contributed offensively to the team last season. Robert Housler, the third-round pick this year, seems like a project at this point, though.

It never hurts to help bolster the pass rush and Sam Acho should do that, be it this season or in the future. The rest of the picks look like depth or special teams guys.

I don't think one can hand the Cardinals a good grade based on the selection of Patrick Peterson, although that was a very solid pick. I had hoped Arizona would make a bigger splash with its subsequent picks but they seemed to have stayed true to their player ranking and took best players available rather than for need or wow factor.

This year's draft for the Cardinals was not fun for the immediate reaction. Yes, there was joy after the Cardinals selected Patrick Peterson in the first round. But for the fan who was expecting the Cardinals to address some or all of their needs, this draft was not for them. A running back? A fullback? No offensive linemen? No pass rush help until the fourth round? Considering the players they passed up, it was very frustrating.

That said, after you think about the picks, they make sense. The team reached for nobody. Ken Whisenhunt appears to have learned from doing that in the past. Levi Brown was a reach, as was Cody Brown. This year they let their draft board dictate their picks, which is a bold way to go.

My favorite picks? Peterson, Sam Acho and Quan Sturdivant. Acho appears to be a very polished linebacker and will fit in nicely with the guys already there. Sturdivant was a guy I considered selecting in the second round of one mock draft I participated in. To get him in the sixth round is a steal.

I'd say that of the eight picks they made, three are bona fide "steals" (Peterson, Williams, Sturdivant). All of them appear to be able to be a contributor in some form this year.

I have no idea how to rate an NFL draft immediately after its completion. I'm barely ready to rationally discuss the 2008 draft. However, I am impressed the Cardinals' front office seems to have a cohesive talent acquisition plan (draft on best talent available especially in light of likely free agent moves and use intangibles as a tiebreaker) and are willing to execute on it consistently. Replacement-level business competence makes the Cardinals the best-run shop in town and quite possibly the NFC West.

Patrick Peterson: A+. I was very afraid that, with Gabbert falling to them at this spot, they would "run to the podium to grab him" as one mock draftist said. I was willing to deal with that, but I'm glad they chose to go with perhaps the most talented player in the entire draft. Looking forward to a PP/DRC backs tandem.

Ryan Williams: A-. I like the pick, and Williams is a good back. It's just a little perplexing. Granted, neither Beanie nor Hightower produced much last season, but it was also Coach Whiz's fault for not giving the run a chance. But given how this year's draft went, one would think the Red Birds will be running like hell next season.

Robert Housler: B-. They need a tight end, especially one that can stretch the field with his receiving skills, but I would have preferred a pass rusher here.

Sam Acho: A. I really like this pick. I think Acho will end up being a very good value pick for the fourth round. This will be one of those typical later round gems the Cardinals find a way to pick every year.

Anthony Sherman: B. The Cardinals needed a fullback, I guess. They weren't going to try to fill a huge need in the fifth round, so they got someone who'll upgrade a position they would have liked to upgrade, but didn't need to. Sherman is considered the best fullback in this draft, if that means anything.

Quan Sturdivant: A+. Another late round diamond in the rough for Arizona. On some draft boards, he was considered second-round talent and the Cards were able to get him in the sixth.

David Carter: N/A. He'll be lucky if he makes the roster, so I don't see this being a huge impact pick.

DeMarco Sampson: N/A. Maybe he'll be a training camp surprise like Stephen Williams was last year, but I doubt it.

You mean I had to pay attention to this? I was hoping you'd ask me about my favorite royal wedding hat....

After my half bottle of wine I just drank - I would give them a B- It looks like Whiz had "draft the best player possible" written with sharpie on his hand, which he referred to all weekend. Extra credit for the awesome names they got: Sam Acho and Quan Sturdivant - but would be better if they combined them - Quan Achovant.

You can't be harsh on the Cardinals when they managed to land Patrick Peterson, arguably the best player in the entire draft. I think that the pick of running back Ryan Williams could also pay dividends after an ugly season in the Beanie Wells-Tim Hightower backfield last year.

The Cards, however, did not take an offensive tackle or an offensive linebacker through the entire draft and thereby failed to address two of their biggest needs coming in.

Arizona also failed to draft a quarterback; one can only assume that the Cardinals will acquire either Marc Bulger or Kevin Kolb before the start of the season (assuming that there is a season). Regardless, you have to like what the Cardinals did: they drafted for value and now have pieces that could make an impact right away.