With the 2011 NFL Draft mere hours away and the Carolina Panthers about to go on the clock with the first overall pick I thought it would be a worthy pursuit to look at the recent no. 1 overall picks. I'm sure when Panthers fans saw their team struggle through a 2-14 season they thought well hey at least we'll get a franchise changing talent at the top of the draft!

Well my southern friends are in for a surprise.

Everyone knows about the rousing success the career of 1998 no. 1 overall pick Peyton Manning has been. He's a four-time MVP, Super Bowl champion, and vaunted commercial pitch man. But his brothers in top pickdom that have followed haven't exactly been a group that sets the world on fire. 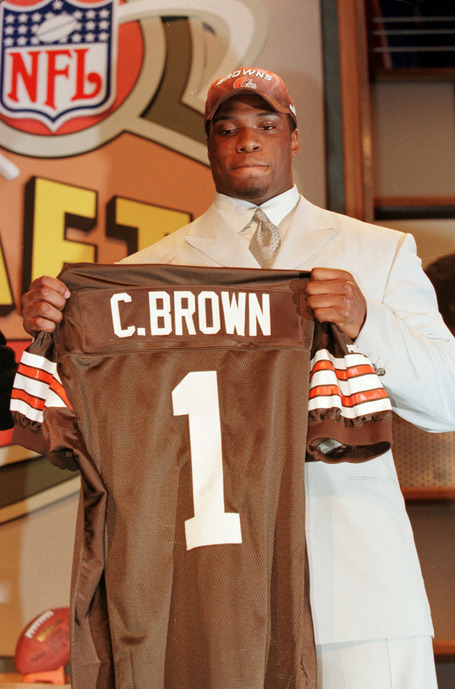 1999:  Tim Couch, Cleveland Browns - the record setting passer at Kentucky came into Cleveland with high expectations and left with a bum shoulder. Couch lasted five seasons with the Browns but threw more interceptions than touchdowns (67 to 64) and had a less than stellar 22-37 career record as a starter. He did have a decent 2002 season and lead the Browns to a playoff berth but broke his leg in the final game which began the Kelly Holcomb era in the Dawg Pound.

2000:  Courtney Brown, Cleveland Browns - Surely a team couldn't strike out twice in a row with the top pick in the draft, right? Clearly you don't know the Cleveland Browns. Brown was a decorated collegiate defensive lineman and helped spearhead a dominant defense Penn State defense with teammate LaVar Arrington. With all the measurables the Browns viewed him as a relatively safe pick. In his first season Brown played all 16 games and came up with a decent 4.5 sacks. That was about the peak for him. He never again played a full season after struggling with injuries and recorded just 19 sacks in a 6 year career. Swing and a miss.

2001:  Michael Vick, Atlanta Falcons - Sometimes he's an electric once in a lifetime talent, other times he's in prison. So is the life of Michael Vick. When he's not been in prison he's led the Falcons to the NFC Championship game and actually made four Pro Bowls. After getting out of prison he's enjoyed a career renaissance with Philadelphia that has allowed them to dispose of Donovan McNabb and look to trade Kevin Kolb. There isn't a whole lot more to tell you about Mike Vick that you don't already know. Dude is fast.

2002:  David Carr, Houston Texans - This guy really looked like the alpha QB coming out of college. He had a rocket arm, he was a good looking dude, and if memory serves he had a hot wife. But all the hot wives in the world can't save you from the original offensive lines of the Texans. He was sacked roughly a billion times in five seasons in Houston but the real problem was he never led the team to a record that was better than 7-9. His statistics were also exceedingly mediocre. Since leaving Houston he's served as a backup in Carolina, New York, and San Francisco.

2003:  Carson Palmer, Cincinnati Bengals - Before Kimo Von Oelhoffen destroyed his knee in the 2005 playoffs, Palmer looked like he was on the express train for greatness. After riding the pine his entire rookie year, Palmer took over in 2004 and by 2005 was a legit star. In that season he threw for over 3,800 yards, had a 67% completion percentage, and threw 32 touchdowns to just 12 picks. Then he blew out his knee and things were never really the same. He rebounded with a strong season in 2006 but since then he's continued to struggle with injuries and rising interception totals. At the moment he's threatening retirement if the Bengals won't deal him out of town.

2004:  Eli Manning, San Diego Chargers -  Obviously Eli Manning was traded to the New York Giants on draft day after pouting his way out of San Diego but for a minute he was a Charger. Eli managed to climb the Super Bowl mountain top like his brother Peyton when the Giants defeated the Patriots in Super Bowl 42 but his personal success has not been on par with big bro. In seven seasons, Manning has thrown 156 touchdown passes but his pension for untimely interceptions and inaccurate passing has helped him to an average 80.2 career QB rating. He's has a solid but not spectacular career.

2005:  Alex Smith, San Francisco 49ers -  He has the hands of a 12 year old girl and played out of a spread at a non-BCS school, obviously that has all the makings of a number one overall pick. Smith has had a complicated career in SF as his statistics aren't as bad as most would have you believe (over 80 QB rating the last 2 seasons). He missed all of 2008 with injury and though he returned to start 20 games the next two seasons he didn't accomplish nearly enough to satisfy Niners fans. New San Francisco head man Jim Harbaugh has expressed a desire to work with Smith but I mean...come on.

2006:  Mario Williams, Houston Texans - Houston took a lot of crap for not selecting local boy Vince Young or electric running back Reggie Bush so right from go Williams had high expectations. Fortunately for the NC State defensive end, he's at least been better than those two. In 5 years Williams has 48 sacks and was a Pro Bowler in both 2008 and 2009. Odds are you'll be able to pencil the guy in for 8-12 sacks for the next seven years. Houston will take that.

2007:  JaMarcus Russell, Oakland Raiders - The LSU product has been a bust of Leaf-ian proportions. He signed late in his first season and appeared in just 4 games and right then people should have known what they were going to get. In 3 seasons with the Raiders he threw just 18 total touchdowns (to 23 interceptions) and at a 52% completion percentage couldn't hit the broad side of a barn. He was out of football in 2010 and was last seen getting dropped by his life coach. Yikes. He's also Cam Newton's future. Whoops - did I say that?

2008:  Jake Long, Miami Dolphins - In 3 full seasons Long has yet to miss the Pro Bowl and added a First Team All-Pro designation to his resume in 2010. In short he's been quietly excellent for the Dolphins. Only problem is, as the Dolphins continue to scour for a QB most fans will probably suggest they should have snagged Matt Ryan who went just 2 picks later. Still though, hard to complain about Long's production.

2009:  Matthew Stafford, Detroit Lions - See now I've heard this guy is the quarterback of the Detroit Lions but I can only vaguely remember him being in for games. Obviously this is my adorable way of saying that the guy just cannot stay on the field. In two seasons he's played in just 13 total games and seems to have a shoulder made of paper mache. He was off to a smashing start in 2010 - 6 touchdowns to just 1 interception - and if he's able to pick up where he left off the Lions will be in good shape. His legacy will be defined by his health.

2010:  Sam Bradford, St. Louis Rams -  Probably has the best star potential of anyone on this list. In his first season, Bradford took the Rams from entirely helpless to the brink of the NFC West title. His stats were somewhat average (18/15 TD/INT ratio) but given some maturation and more weapons he's going to be a killer. As a Cardinal fan I'm not looking forward to it.

Let's break those 12 top picks down:

That's some high bust potential right there. As for stars I feel like you're probably stretching it a bit to include Vick and Long. So bad news Panthers fans, you might think you're getting a golden ticket to success but you may just end up with more frustration.