After NFL commissioner Roger Goodell sent a message to the players requesting a return to the negotiating table, the players have responded with a letter of their own, and one player, punter Chris Kluwe of the Minnesota Vikings, had a little time on his hands and decided to describe the negotiations process and lockout through a whiteboard message.

The letter the players responded with echoes many of the sentiments of the interview that DeMaurice Smith gave SB Nation on Friday.

Essentially, the points were that regardless of whatever good items the NFL was offering, it was not a point of negotiating. The players in that deal were unable to pick and choose -- they were required to take the financial part as well. As the letter says, the deal with the "giveback" that the players describe as "the worst economic deal for players in major league pro sports."

The sticking point for the players is indeed money. What the NFL was offering was less money than before, but a much higher salary floor. They claim that in the first four years of the ten-year deal that was offered the players would be losing over $2 billion dollars to the owners, who admittedly are not losing money.

In a second, more humorous event, Minnesota punter Chris Kluwe got a whiteboard and illustrated his case against the owners: 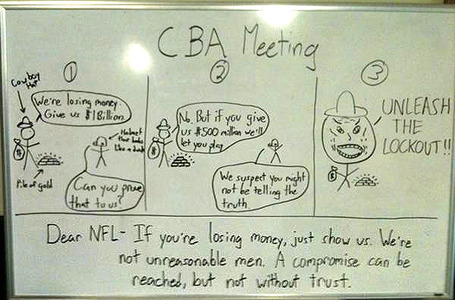 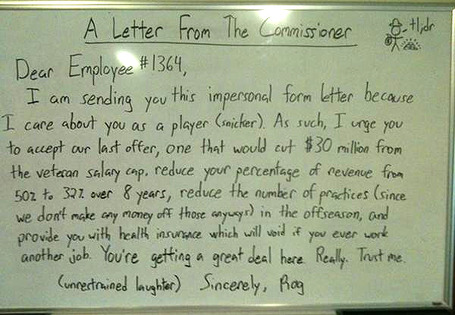 This does't sound like a disagreement that is going to end anytime soon, does it?