The Arizona Cardinals have not scored in the first quarter of a game since Week 2 of this season. That streak has continued on into their Week 16 game against the Cincinnati Bengals, as they have yet to score in the entire first half. As the teams enter halftime, the game has been decidedly lopsided and the Bengals lead by a score of 20-0.

Arizona John Skelton has been hurried and flustered the entire game. He is only 5-for-13 with 63 passing yards, has thrown two interceptions and has been sacked three times.

His counterpart, Andy Dalton, has been solid throughout the half, leading the Bengals on four scoring drives. Through two quarters of play, Dalton is 15-for-22 with 136 passing yards, no interceptions and two touchdown passes. The first TD pass came in the first quarter on an 11-yard pass to Jermaine Gresham, who made a terrific play to get both feet down in the end zone before falling out of bounds. That play will be all but forgotten by the end of the game as Jerome Simpson may have made the play of the year with a 19-yard touchdown that ended with a full front flip over a Cardinals defender into the end zone.

The Cardinals need to regroup in s big way in the second half if they want to keep their playoff hopes alive.

To discuss things with Cardinals fans, head to Revenge of the Birds. To talk about the game with Bengals fans, go to Cincy Jungle. 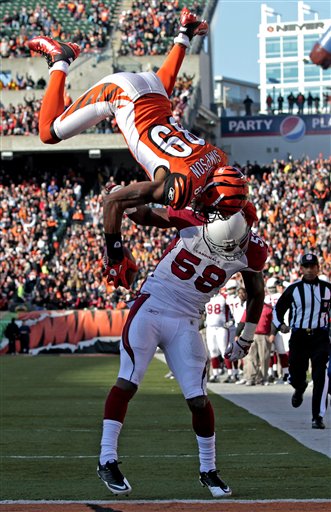