Patrick Peterson Enters Hall Of Fame, At Least His Shoes Do

Share All sharing options for: Patrick Peterson Enters Hall Of Fame, At Least His Shoes Do

Patrick Peterson may some day be inducted into the Pro Football Hall of Fame in Canton, OH. It's a tad early yet to call the Arizona Cardinals rookie a "lock" for the prestigious honor but he's already got one foot in the door. Or two shoes to be factually correct.

The Hall of Fame announced  they have inducted Peterson's cleats that he wore during his 99-yard game winning punt return touchdown against the St. Louis Rams on November 6. The shoes commemorate Peterson as the only player ever to have four punt return touchdowns of 80 yards more. The four also ties an NFL record for the most punt return TDs in a season.

Peterson has five more games to break and own the record and will surely do so if opposing teams continue to kick him the ball in the middle of the field.

The size 12, Nike cleats are now part of the Hall's permanent collection. The look great and probably even smell like winning. 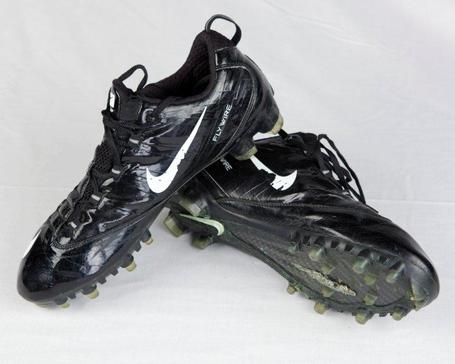 Now, the next trick for Peterson will be to get his jersey in the Hall for setting some records as a cornerback.

And oh, by the way, Peterson was named (for the second time) the NFL Special Teams Player of the Week thanks to this play. Ho hum.

Patrick Peterson Nominated For 2011 NFL Rookie Of The Year