Cardinals Vs. Giants, Monday Morning Quarterback: Blame The QB, Not The Ref

We break down the three failed first half red zone attempts and other big moments from the Arizona Cardinals loss to the Washington Redskins.

Share All sharing options for: Cardinals Vs. Giants, Monday Morning Quarterback: Blame The QB, Not The Ref

There are many regrets for the Arizona Cardinals after once again losing a game they should have and could have won. In their postgame interviews, we heard discussion about red zone efficiency in the first half, third down conversion rates and once again the "mistake" word is used a lot. Credit the New York Giants for coming up with the plays late in the game, but we are not here to credit the Giants. We are here to discuss what went wrong for the Cardinals.

A lot went wrong for the Cardinals, here's a list.

It started on the first offensive possession of the game when Kevin Kolb was gifted the ball by his defense at the Giants 16-yard line. It's not often you get to start the game in the red zone and to come up with only three points is discouraging.

After a Beanie Wells stretch run went no where and Kolb found Larry Fitzgerald for 8 yards, the Cardinals were facing a 3rd and 3 from the 9-yard line. Instead of handing the ball to Wells (as Whisenhunt would do with success later in the game), Kolb set up out of the shotgun and immediately looks into the end zone.

You can see in this picture that Kolb had Early Doucet open on an underneath route for an easy first down, but instead he leaves good protection in the pocket and scrambles right and ends up throwing the ball away. 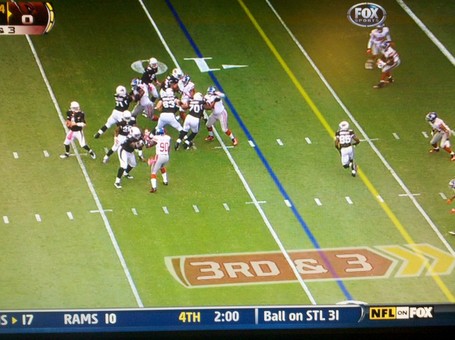 Leaving the pocket too soon is becoming a theme for Kolb.

The good news, Jay Feely made the 27-yard field goal and was 2-2 on the day. Progress!

On the Cardinals very next possession they got the ball in great field position (AZ-48) after another strong defensive stand. Kolb moved the ball down the field with a mix of short passes and runs and got to the Giants 17-yard line.

On 3rd and 6, Kolb is once again in the shotgun and has protection long enough to get rid of the ball. It's not clear why he couldn't find anyone but while deciding what to do, Osi Umenyiora beat Levi Brown around the edge gets a hand on Kolb's arm and forces the fumble. Kolb easily could have fallen on the ball and at least preserved the chance for a field goal but tries to pick up the bouncing bean and bobbles it to the Giants for a turnover.

You can blame Brown for getting beat around the edge by one of the best in the league and/or you can blame Beanie Wells who's staying home in protection but helping out in front of Kolb instead of trying to help Brown, but to me this play was blown when Kolb couldn't find an open receiver. Maybe no one was open, maybe he didn't pull the trigger, but you can't expect the pocket to hold forever. He had time.

The defense once again forced a punt and the Cardinals offense was in business. Kolb put together the longest drive of the game going 79 yards in 16 plays and eating 9:20 off the clock. Up to this point, Arizon was completely dominating the game on both sides of the ball.

The Cardinals got to the Giants 8-yard line and had a 2nd and 1. Kolb in the shotgun (again) has Early Doucet and Andre Roberts both open underneath but the play is designed to go to Todd Heap in the end zone. Giants safety Kenny Phillips actually bites on the underneath receivers and Heap is wide open. Unfortunately, Giant DT Chris Canty blows by RT Brandon Keith and gets his paw on Kolb and prevents the pass. 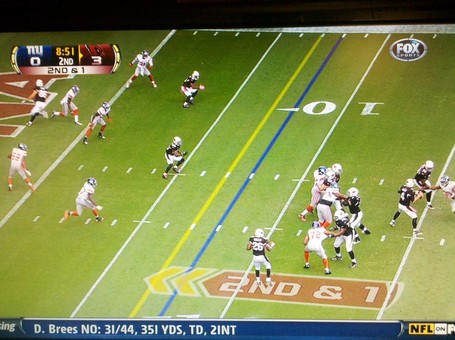 Maybe Kolb can step up and buy just enough time to find Heap for the TD. Maybe he should have taken the first down underneath to Doucet when he had the chance. Clearly, Keith needs to hold his block longer.

On 3 and 1 the Cardinals try to run Wells off the left side but get stuffed. Feely makes his second field goal. Yippie!

Fitz sums it up

Larry Fitzgerald best explains the impact of these first half mistakes.

"Our defense played well for us again in the first half. We had some great opportunities to put seven on the board, but we came away with field goals. We could have gone up 14-0 (actually 21-0) at that point, but instead we only went up 6-0. At that point, that would have put them in a whole different game plan. They would have had to start throwing the ball more and it would have opened things up for our defense, but we didn't capitalize on those turnovers."

The good news is the Cardinals did better in the second half. All three red zone trips ended up with Beanie Wells touchdowns, although one drive started at the Giants 5-yard line thanks to a great David Carter forced fumble.

Kolb was 20-34 for 237 yards through the air. He was sacked four times, picked off once and fumbled once. He seemed skittish in the pocket and didn't make the plays he needed to make. His longest completion was a jump ball that Larry Fitzgerald won in the air because he's Larry Fitzgerald.

We are not going to call Kolb a bust (or anything close) but he has to get better than this.

The discussion on Monday morning is on the blown call by the official who decided to read the mind of Giants WR Victor Cruz and rule that he gave himself up on this play (video). While the rule is clear about not being able to challenge, Cruz himself said after the game that he gave the ball up because he thought he was down by contact (he thought he was touched and wasn't). He didn't say he was giving himself up and when you watch the video it seems pretty clear he slipped.

Even Eli Manning thought it was a bad call, "We got a break on that one, I think. I thought it was going to be ruled a fumble. I saw it pretty clear."

That doesn't, however, mean the Cardinals would have won the game.

In the Carolina, Washington and now New York games we've seen the Cardinals with the ball late in the game trying to protect a lead. All three times the team failed to moves the chains or take time off the clock. Twice it cost them the game and it almost did against the Panthers who moved to within a few yards of the end zone in the final seconds.

This time it was a 27 second, three and out that consisted of a short run and then two incomplete passes. It was almost identical to what happened in Washington and the result was the same.

More than the blown chances to win on a final drive as happened in all three losses, the inability to hold leads and eat clock is more troubling. On these occasions, Whisenhunt has been very predictable and equally ineffective with his calls. One short run and then abandon the rush.

The Cardinals defense was much maligned after the first two games of the season but came up big again here. They absolutely dominated the first half, forcing a fumble and two punts on the first three series and allowing just 10 points on 116 yards in the first half.

That continued into the third quarter where the were only on the field for 6:02 thanks to a strong hold on their first defensive possession and a quick forced fumble on their second. They gave up just 30 yards in the third and put seven points on the board by giving the offense ball just five yards out of the end zone.

In the fourth quarter, however, they fell apart. 21 points allowed on 177 yards. Manning went 14-17 for 180 yards while the Giants rushed for negative three. This was the big play offense Giants writer Ed Valentine warned us about.

New York got almost half their total yards (360) for the game in the final quarter and only ran for 54 yards on the game.

Here's how Darnell Dockett summed it all up:

"We had great energy. We played against a physical team, and I think we won the physical battle. It's very disappointing, but there is a lot of football left. We are not going to point fingers and say we are not good. I'm confident with this team. I'd take this team anywhere, any place, any time. We've just got to find a way to finish it."

Here's five positives and five negatives from Sunday's loss to the Giants via the fine folk at Revenge of the Birds blog: