There aren't a ton of positives to take from the miserable start to the Arizona Cardinals season. 1-4 is about the direct opposite of what some people thought this team could do going into their bye week. With the team playing so poorly we are forced to look for bright spots in individual performances and one that's stood out all year is the power of Beanie Wells stiff arm.

In the game against the Minnesota Vikings it was Adrian Peterson who got all the attention with his three touchdown including one where he steam rolled Cards CB Patrick Peterson.

Beanie Wells laid some wood in that game too. The Cards fell behind by such a big margin so early in the game that Wells didn't get but 60 yards (although he did have 20 carries).

Numbers aside, Beanie did deliver a devastating blow to Vikings CB Cedric Griffin.

Griffin came in for a tackle on the powerful Wells only to be greeted by a forearm shiver that sent him flying in the opposite direction with both his helmet and skull cap parting ways from the defender's head.

Asked if it was the best hit he's ever laid, Wells said, :Yeah, I'd say in the NFL. Definitely."

He went on to describe the moment as, "Pretty exciting".

What Wells lacks in elaborate responses he makes up for in powerful runs. You better believe defensive backs around the league are thinking twice about taking on Beanie.

Here's a great photo of the hit and a YouTube video of the devastation that Wells left in his wake. 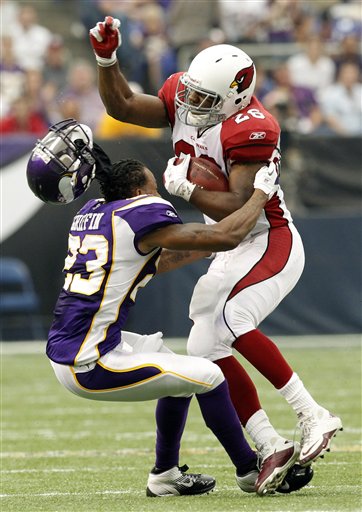 Minnesota Vikings cornerback Cedric Griffin, left, loses his helmet as attempted to tackle Arizona Cardinals running back Beanie Wells during the first half of an NFL football game on Sunday, Oct. 9, 2011, in Minneapolis. (AP Photo/Genevieve Ross)

If you need more Wells power to cheer you up from the Cardinals season, just search YouTube for "Beanie Wells Stiff Arm".