Kevin Kolb called out his teammates lack of preparation and attention to detail. Breaking down the game's key plays, however, shows that he also needs to look hard at the guy in the mirror.

That realization obviously has dawned on the players as well as the fans. Now we will see what these guys are truly made of. We'll see if coach Ken Whisenhunt's constant declarations in support of this "hard working, professionals" is worth the air used to utter them.

In the short-term, things are not looking good for team unity and it started with quarterback Kevin Kolb who pointed the blame finger after the game.

"Our head coach hit the nail on the head -- we have to get more detail oriented," Kolb told reporters at the Metrodome. "It starts with meetings, showing up to work on time, getting in early, getting your work done, and all the stuff a professional is supposed to do. Maybe it takes a game like this to figure that out."

There's obviously some truth in that statement but there's also an old saying about pointing your finger at someone else and looking down and seeing four other fingers pointed right back at you.

Kolb is not getting better with time as we would have hoped. On Sunday he repeatedly threw balls low enough that defensive linemen were batting them down with their heads and shoulders and then missed wide open receivers, including a sure touchdown to Rob Housler.

In a sign of things to come, Larry Fitzgerald dropped the first pass of the game, a quick five-yard underneath route. But after Wells ran for six-yards on his first carry he was lifted from the game and Kolb in the shotgun had Housler open on a stop route near the first down line but bounced the pass off Vikings DT Kevin Williams' hat.

Three and out to start the game...then things went bad.

Keeping with the theme of tipped balls, Kolb's first interception came on his first snap after Adrian Peterson punched one in. A ball over the middle to Andre Roberts near the first down line was tipped and intercepted by the Vikings. One 24-yard scamper by AP and the Cardinals are down 14-0.

Take a look at the height of the ball as it's tipped at the line. The lineman is being pushed by the center and doesn't have his arm fully extended and he's certainly not jumping. That's on Kolb. 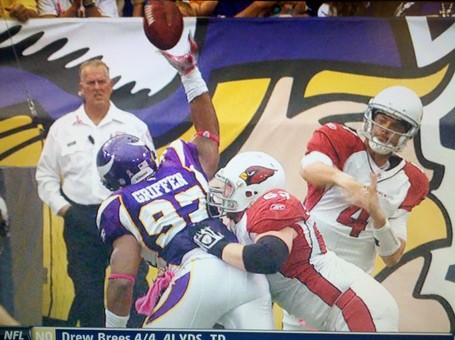 Next time up, Kolb completed a nine-yard toss to TE Jeff King and with 2 and 1, the Cardinals, of course, decide to throw the ball. Kolb in shotgun five yards behind the line of scrimmage takes and ball and retreats another four yards. While surveying the field he has the ball knocked away by Brian Robinson who's outside speed rush against RT Brandon Kieth got him in range of Kolb.

Kolb has to know how to read that outside pressure and step up and make these throws. 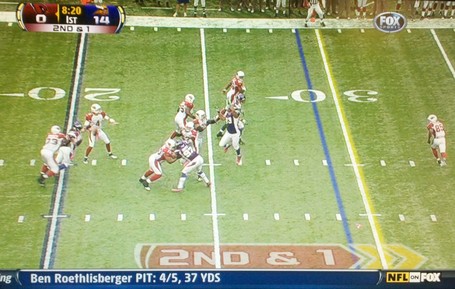 This is a mirror image of the Kolb fumble against the Giants in the red zone. The difference is, in that game the Cardinals lost a scoring chance. In this game they turned the ball over at their own 25 and the red zone defense once again allowed seven points. 21-0, game over.

With a long bye week to come, it will be interesting to see what moves Whisenhunt makes.