When Ken Whisenhunt arrived in Phoenix he spoke about creating a culture centralized around winning.

The team, fresh off another yet losing season, was reveling in mediocrity and obscurity. Not only did NFL players not care about the Cardinals, football fans within Arizona couldn't have been more indifferent.

At the time, the Red Birds had railed off six consecutive bottom-four finishes (31st, 32nd, 32nd, 31st, 29th, and 29th respectively) in the Harris NFL Team Popularity Poll, a yearly survey taken by Harris Interactive that encapsulates the popularity and marketability of a franchise.

Say what you want about Whisenhunt, but the man kept his promise.

In his inaugural season as coach of the Cardinals, the squad scratched and clawed its way to an 8-8 record. The first step had been taken. Following the season, Arizona finally climbed out of the gutters of the Harris Polls, ranking in at 24th.

Finally, the team was taking a step forward.

Then came the one most sudden and dramatic Super Bowl runs within recent memory.

After finally overtaking the Seahawks as the NFC West Champions, the Cardinals shocked the world three weeks in a row, and came about as close to a Super Bowl win as humanely possibly before Santonio Holmes crushed the hopes and dreams of everybody in the state.

Still, something was accomplished that year. The Cardinals were finally significant. They mattered. In true Arizona fashion, the state bandwagoned together with a fervor unforeseen since the Diamondbacks' World Series run. Cardinals flags were on every car, signs were outside every house and business. NFC Champion apparel flooded the market. It was a spectacular sight to see.

Not surprisingly, the Red Birds leapfrogged eight spots to grab the #16 ranking on the 2009 Harris Poll.

The Cardinals continued to build on the momentum created by their extraordinary run, as the tandem of Wiz and Warner improved yet again in 2009-2010, piling up a 10-6 record, a second NFC West title, and another home playoff win.

Arizona football has never mattered as much as it does now. Even as the team is mired with faults, most namely an uncertain quarterback situation, the Red Birds are the talk of the town.

And now, with the release of the newest Harris Poll, we have documented proof of this phenomenon. The Arizona Cardinals scrambled up the rankings once again, coming in at a respectable 11th.

For the first year since the poll's inception, they are the most popular team in NFC West. Hooray for progress!

Congrats to Whisenhunt, Rod Graves, and Bill Bidwill for (re)awakening an energized fanbase to Cardinal football. 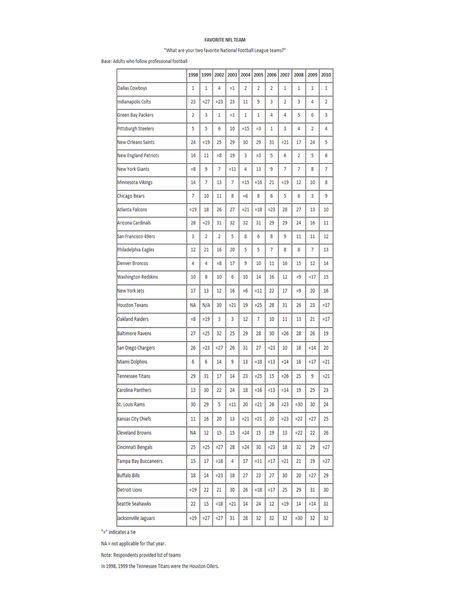