Bryan Gibberman breaks down how the Cardinals have used Patrick Peterson on offense over the past two seasons.

One of the most frustrating parts of watching football is seeing coaches continually ignore and not find ways to get the ball into their most skilled player's hands.

It happens far too often with too many teams.

The Green Bay Packers have virtually ignored Randall Cobb in their last two games despite him having their longest offensive plays from scrimmage, a 28 yard run against the Chicago Bears and a 20 yard run vs. the Seattle Seahawks. According to Pro Football Focus (whose numbers will once again be used throughout) in Week 2 Cobb only played 20 of 68 snaps and Week 3 it dropped even further to nine out of 76 snaps. Meanwhile Cedric Benson, who is averaging 3.1 yards per carry, has been given the ball 46 times. I’m not saying Cobb needs to get 20 touches a game, but 4-8 carries and 5-7 targets is reasonable.

Joshua Cribbs, the Cleveland Browns kick return specialist, and potential WR/RB threat, has only played seven offensive snaps the entire season. He hasn't been handed the ball once and only has two targets, catching one pass for four yards and the other for 24. That 24 yard reception is tied for the longest play by a Browns receiver this season. The only longer pass Cleveland has completed was a 27 yarder to tight end Benjamin Watson. It is completely inexcusable for Cribbs to not be a bigger part of the gameplan on a week to week basis.

Luckily the Arizona Cardinals don't fall into the category above.

Head Coach Ken Whisenhunt and offensive coordinator Mike Miller do a tremendous job of being creative and finding different ways to get the ball into their playmakers' hands. They move Larry Fitzgerald all over the field, use all thee running backs in Beanie Wells, Ryan Williams and LaRod Stephens-Howling, have started incorporating first round pick Michael Floyd into the offense and find snaps for young, upcoming tight end Rob Housler.

To take it a step further -- and what I love most is the Cards are willing to use Patrick Peterson, probably the most dynamic player on the team with the ball in his hands on offense.

Over the past two years he has played five snaps on the offensive side of the ball (my unofficial count through research) -- three of the plays were direct snaps, one he lined up as a running back and the other he was used as a wide receiver.

Only one of the plays was successful, another one had the opportunity to work if it was executed properly and the others weren't effective.

Each of the Peterson's plays this year, which occurred in the last two games against the Patriots and Eagles, were both on the sixth play of the opening drive of the game for Arizona.

When you see the screen shots to follow it is pretty obvious why one of them worked and one of them didn't. 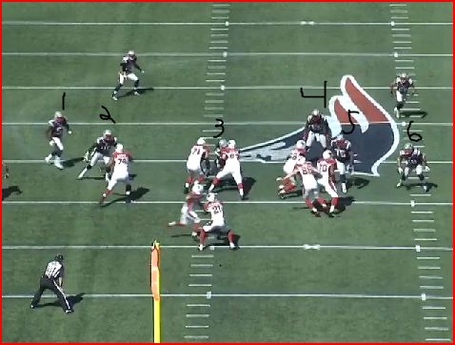 Here Peterson gets the direct snap and right from the start it looks good. New England was completely confused and only had six guys in the box and two safeties up high. Peterson gets the edge to the left and is able to make a big play. 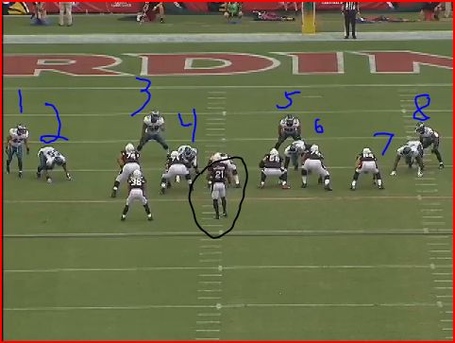 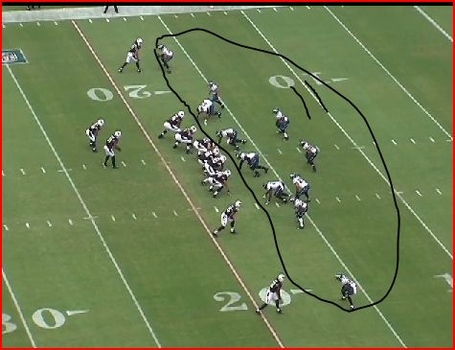 The Eagles weren't fooled. They had eight players in the box and no safeties deep.

For this package to truly work there has to be the threat of the pass. The Bengals were able to hit the Redskins over the top out of a similar package with Mohammed Sanu throwing the ball to A.J. Green for a 73 yard touchdown.

It's not out of the question for Peterson because of his special skills to be able to break run against the tight look the Eagles showed, but they would be very vulnerable to a pass over the top. If anyone has the guts to let Peterson throw a pass Whisenhunt is the guy. 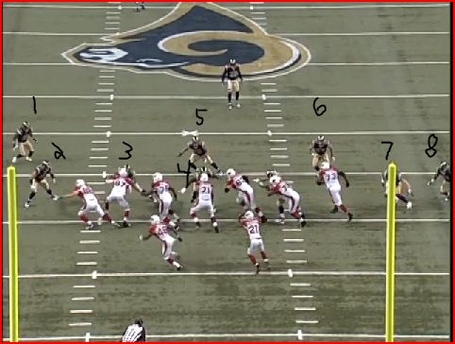 Not nearly as compact as a look as the Eagles, St. Louis had eight in the box, but kept one safety high. Peterson fumbled the snap and the play never got to develop.

These next two schemes with Peterson I personally like more than the direct snaps. 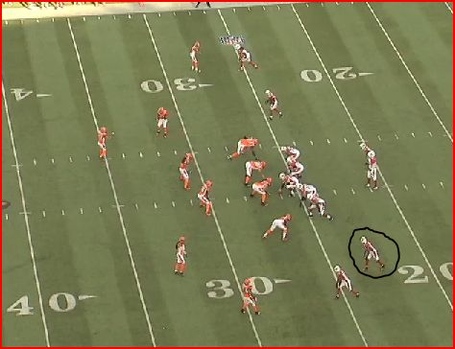 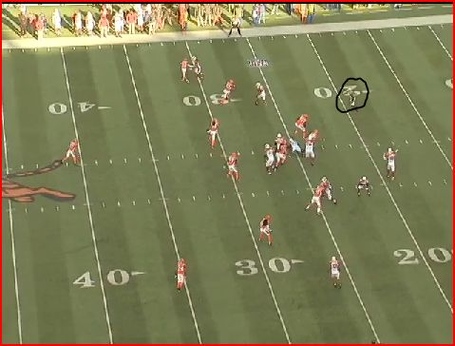 On this play the Cardinals tried a bubble screen. If Early Doucet was able to do a better job pushing his man to the inside Peterson would have been able to hit the crease between him and Larry Fitzgerald for a nice gain. Doucet wasn't able to hold his block and Peterson was tackled for a loss. 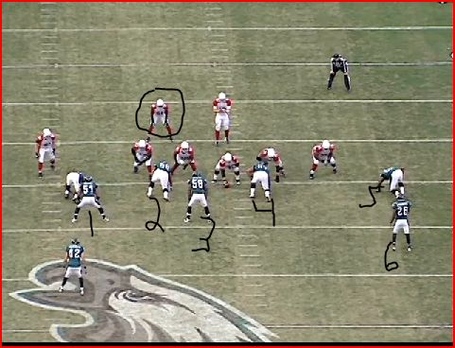 Eagles show only six in the box, could even argue it's really only five. The sixth guy is kind of in-between. This package led to a nine yard gain on a LaRod Stephens-Howling wide receiver screen to the outside.

I would love to see Peterson get five to seven snaps a game on offense, but understand why the coaching staff is hesitant to do that.

He is their best cover corner, returns punts and has played 228 of 229 defensive snaps through three games. Asking him to trout out multiple times a game on offense is really asking a lot.

In regard to the different packages the Cardinals use with Peterson my preference would be for him to be used as a wide receiver or running back and not receive direct snaps.

As we saw in the play against the Eagles this year, now that it's on tape and teams are ready for the Peterson package, it is easier for defenses to key on him. As I mentioned before Whisenhunt very well could be setting up a Peterson pass, which has the opportunity to work against the right look, but it's still a high risk play.

If you put Peterson at RB or WR the defense is still going to pay extra attention to him, but with the ball in Kolb's hands you have to be cognizant of everyone else on the field. If you key too much on PP something else will be available. This way you can still get the ball in Peterson's hands, but there are other options and it is a much safer alternative to letting a defensive player throw the ball.