After an impressive tenure with the Arizona Wildcats in college, Rob Gronkowski has gone on to thrive with the New England Patriots in the NFL. And while Gronk's on-field performance has earned him a ton of recognition and praise, he has done some things off the field that have raised some eyebrows.

Just hours after a Super Bowl loss, Gronkowski was seen dancing without a shirt at a nightclub despite battling an ankle injury. Now, as his fame reaches an all-time high, the star tight end has announced his own cereal brand: Gronk Flakes.

We have a picture after the jump. 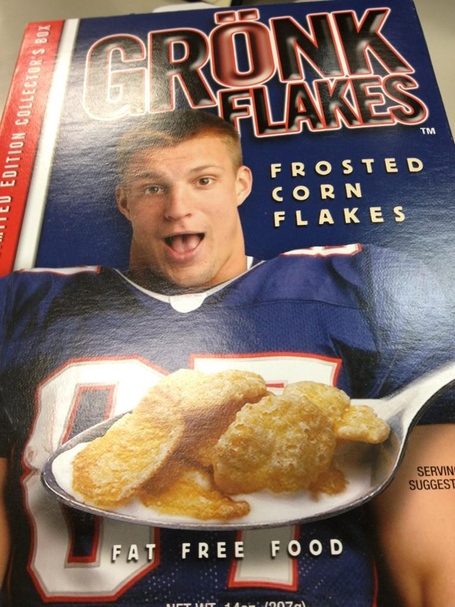 Yes, it's real. Those in the New England area can find them at various retailers, but word is they're going quick.

"If you want to be buff like me, you'll eat that stuff," Gronkowski told the Boston Herald's Jeff Howe.

For more on Gronk Flakes and UA football throughout the season, be sure to check out AZ Desert Swarm. Head to Pats Pulpit for the latest Patriots news.