Why Has Larry Fitzgerald Struggled So Far In 2012?

Breaking down what Seattle and New England did to keep the ball out of No. 11's hands.

Share All sharing options for: Why Has Larry Fitzgerald Struggled So Far In 2012?

The Arizona Cardinals are 2-0, but surprisingly superstar wide receiver Larry Fitzgerald hasn't had much to do with it.

Through two games Fitzgerald has five catches for 67 yards. That is his worst statistical two game stretch since 2004, his rookie year, when Fitz had four catches for 73 yards in back to back games.

It's not from a lack of trying from the coaching staff. Coach Whisenhunt and offensive coordinator Mike Miller are lining the All Pro wide receiver all over the field. He has 27 snaps on the left side, 26 on the right, 18 in the slot and even two on the line.

Fitzgerald has been moved in motion seven times, two of those seven resulted in completions.

There isn't one specific reason Fitz hasn't been able to accumulate the numbers we are accustomed to seeing. As you will see the Seahawks and Patriots each used different strategies to limit #11.

It also isn't completely a product of what opposing defenses are doing, quarterbacks Kevin Kolb and John Skelton have both missed opportunities to get him the ball in advantageous situations.

Then there are the positives - even without the big numbers Fitzgerald is still having a positive impact on the offense. It just doesn't show up in a box score, but we will start here.

Here is a play from the first quarter of the Seahawks game. 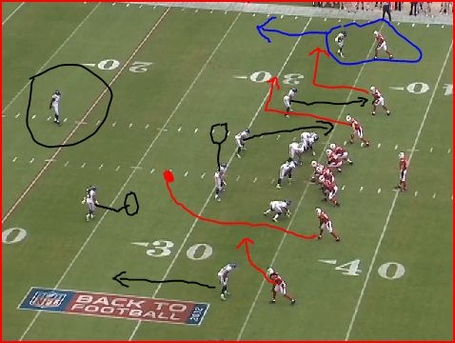 This is a strategy Peter Carroll employed all game. A corner would be locked on Fitz, in this particular play it was Brandon Browner. His main responsibility is to not let Fitzgerald beat him over the top. Seahawks safety Earl Thomas gives Browner help underneath. The linebacker on the right side of the Seahawks formation responsibility is to sit in a zone in the middle of the field. Skelton does a good job of manipulating the defense with his eyes and getting the linebacker to jump to the left towards Todd Heap and then when he steps up in the pocket draws the same player to him. Because Thomas' job is to concentrate on Fitz he hesitates a split second to head to Roberts, which opens him up over the middle for a nice 19 yard gain.

Another play from the Patriots game in the third quarter that Fitzgerald creates: 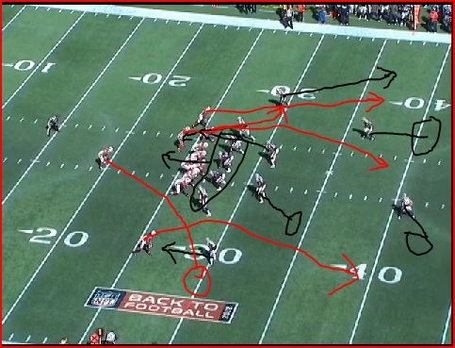 New England sends four players, which is what they did most of the game. The Pats according to Pro Football Focus only blitzed four times. There is a lot going on, on the left side of the field, but what is important here is the right. During this particular play Fitzgerald gains the attention of not one, now two, but three Pats players - the corner lined up right in front of him, the middle linebacker dropping back into the zone to the left of him and the deep safety on the right hand side. He clears all three players out and opens up a nice easy dump off pass to "Beanie" Wells that leads to a 24 yard gain.

Up next we're going to take a look at the basic coverage schemes the Seahawks and Patriots each used to try and keep the ball away from Fitzgerald. 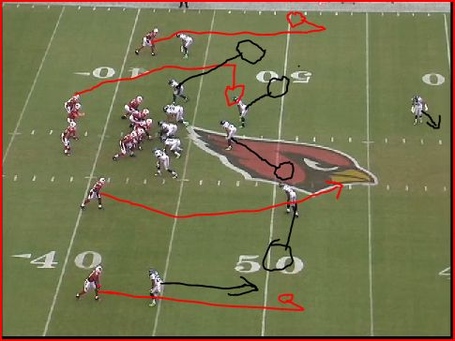 On this play Seattle uses the same basic concept they used on the Seahawks play we showed above. The main difference is it's DE/OLB Chris Clemons who drops into the underneath coverage on Fitz on the left hand side of the field. Browner once again has over the top responsibility in his man to man coverage 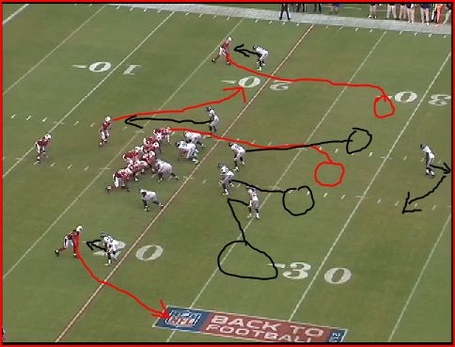 Once again the same basic concept from the Seahawks. This time its Richard Sherman matched up with Fitz. Earl Thomas shows blitz, but drops back into a zone with underneath responsibility on the Cards top receiver. Sherman knowing this runs stride for stride with him and is able to break up the pass. 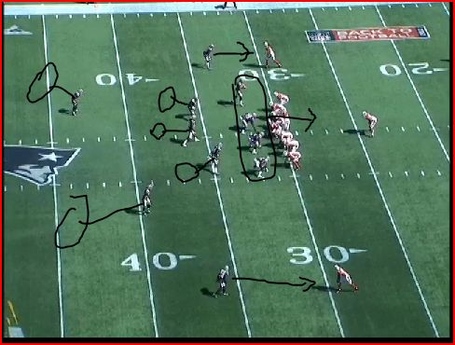 The defense the Patriots employed to shut down Fitzgerald was about as basic as it gets. They really didn't do anything special outside of an occasional double team to take him away. New England trusted its front four to get pressure and limit the Cardinals opportunities to get the ball down the field. They usually dropped their linebackers into a zone, played two deep safeties and matched up man to man on the outside. It was effective.

Here is the part that the Cards need to get worked out. No matter whom the quarterback is if it looks like there is an opportunity presnap to get Fitzgerald the ball it needs to happen. 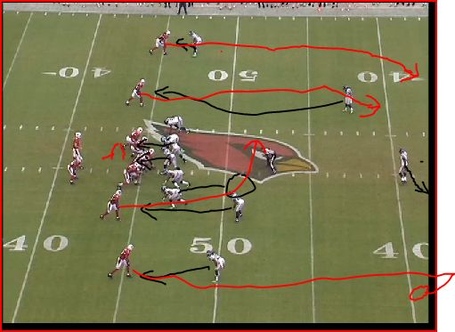 It's pretty obvious here that Fitzgerald is going to have one on one on his side of the field. There is no linebacker to drop into a zone and only one cornerback lined up directly over him. Early Doucet is in the slot with the safety almost 15 yards off. Skelton never looked in that direction, his first read was to the right. He then gets pressured and isn't able to go through his progressions. I would think with this presnap look even if the play calls for him to eyeball right first he would have permission to take advantage of a Fitzgerald one on one situation. 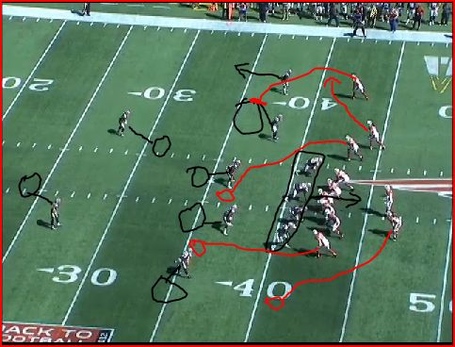 Here the Cardinals run a pick play for Fitz and it's the perfect call. The problem???? Kevin Kolb never looked in that direction - his first read was Todd Heap then he went to Ryan Williams, who he dumped the ball off to for a three yard gain. Meanwhile on the other side of the field Fitzgerald could have been hit for at minimum a 10 yard gain. The corner lined up over Andre Roberts releases and runs straight back, which leaves only the CB lined up with Fitzgerald to guard two players. Roberts sets an "unintentional" pick and #11 comes wide open in the flat. Big time missed opportunity for the Cardinals.

As you can see by this small sample size of plays there isn't one specific reason the Cardinals have struggled to get Fitzgerald more involved in the offense.

From a positive standpoint most NFL teams don't have the big athletic corners the Seahawks employ to be able to run that type of coverage successfully.

Most NFL teams also don't have players with the talent of Vince Wilfork and Chandler Jones in their front four to be able to generate that type of pressure without being more creative.

There is no reason not to think this is just a little blip on the radar for Fitzgerald and the numbers will start piling up again soon.

In 2011 Fitzgerald tore up the Eagles secondary to the tune of seven catches for 146 yards and two touchdowns. It was arguably his best game of the season.

Will history repeat itself? We have to wait till Sunday to find out.

Get more Cardinals coverage at Revenge of the Birds.