Arizona Cardinals fans are used to games ending disgustingly. For once, they can find solace in the fact that their team was the one that was on the winning side. When it comes to the regular season, New England gets all the breaks. When they are in the Super Bowl against Eli Manning, then they run into trouble.

Against the Cardinals on Sunday, it looked like the football heavens were opening up to bless Tom Brady once again. New England scored nine fourth quarter points and were given the ball in field goal range with about a minute left, thanks to a Ryan Williams fumble on third down, when, if that doesn't happen, Arizona punts the ball away and New England would have about 25 second to get across the field.

But then the football gods mocked.

Danny Woodhead scored a touchdown that was called back because of a penalty. Then...this happened

Arizona got the ball and was able to run the clock out. Fans in Gilette Stadium were left looking like this: 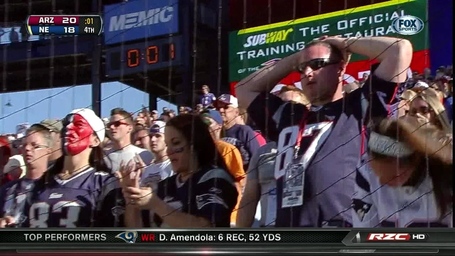 Too bad, Patriots fans. You and your championships and championship appearances can go home disappointed for once during the regular season.