Cardinals Vs. Seahawks Film Review: Looking Back At 2 Plays

Using some All-22 film, you get a look at a couple of plays from Sunday's game.

Share All sharing options for: Cardinals Vs. Seahawks Film Review: Looking Back At 2 Plays

I'm not an NFL coach.

I've never played football at any level outside of in backyards without pads.

I have played Madden for almost 20 years - sidenote I'm getting old.

So that's my background, which isn't all that impressive.

What I'm going to do here is going through the All-22 film anybody can have access to and try to learn something from it. I'm keeping it simple, but these were two plays I found interesting. 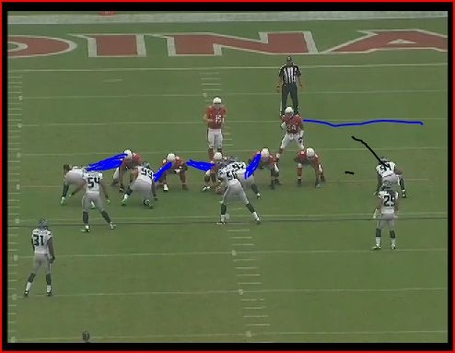 This is something I saw the Seattle Seahawks do a good amount of. The play was a 1st and 10 from the Cardinals 21 yard line with 7:19 left in the first quarter.

Skelton gets rid of the ball quickly, but it seems like Seattle was able to accomplish what it wanted to. Chris Clemons, who is lined up at the width more like a 3-4 outside linebacker than a 4-3 defensive end, gets a one on one situation with Cardinals left tackle D'Anthony Batiste.

The Seahawks only sent the four defensive linemen and dropped everyone else into coverage. Arizona uses the other four offensive linemen, most likely Daryn Colledge, Lyle Sendlein, Adam Snyder and Bobby Massie, to block three Seattle defensive linemen - Brandon Mebane, Alan Branch and Red Bryant. Running back Ryan Williams goes out into the flat.

Seattle lined up the non Clemons lineman over the Cards center, right guard and tackle. Sendlein either intentionally passes Mebane off to Colledge, or Mebane went at angle to take out the Cards left guard to help Clemons get the one on one with Batiste.

On this particular play Batiste holds up and is able to keep Clemons away from Skelton, with the help of the quarterback's quick release.

According to Pro Football Focus throughout the game the starting left tackle allowed one sack and five quarterback hurries. 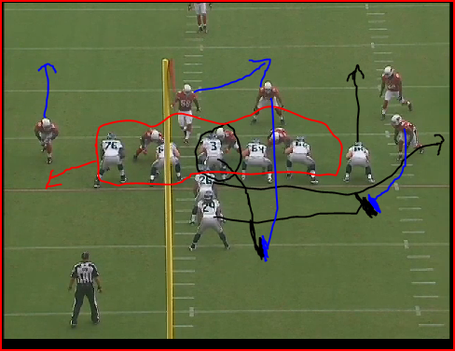 On this next play with 27 seconds left in first quarter on a 1st and 5 from the Seahawks 21 yard line Paris Lenon was able to come away with the first of his two sacks.

There are three choices here -- the Cardinals either completely blew up what Seattle was trying to do with the perfect play call by defensive coordinator Ray Horton, the Seahawks had confusion and screwed up the play or it was a really poorly designed offensive play.

Now either Darnell Dockett, Dan Williams and Vonnie Holliday's goal was to force Seahawks offensive line in that direction to create a lane for Cardinals linebacker Paris Lenon or they went with the flow of the Seattle o-line.

With the direction the Seahawks offensive line moved, and the play action fake not seeming to go with that flow, it was an easy read for Lenon to attack Wilson as he was completely unblocked. Running back Marshawn Lynch was engaged with linebacker O'Brien Schofield, while fullback Michael Robinson ran out into the flat and was guarded by safety Adrian Wilson.

Also possibly confusing Seattle was the presnap movement by the Cardinals. Vonnie Holliday and Dan Williams shifted to the right closer to Darnell Dockett and linebackers Daryl Washington and Paris Lenon flipped spots.