The 2012 British Open came to an end on Sunday in Lancashire. Adam Scott collapsed in his final four holes, blowing a three-stroke lead and effectively handing the championship to Ernie Els. For much of the day, Scott seemed destined to win his first career Major. Instead, it all ended in sorrow.

Phil Mickelson can certainly relate. If one image could signify not only Mickelson's play in the Open Championship, but his play throughout 2012 as a whole, it might well be this one: 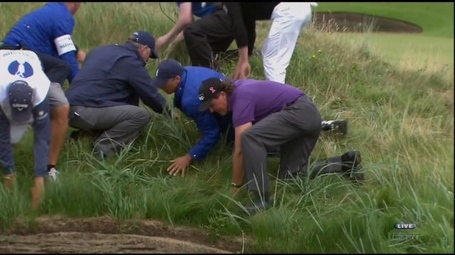 Mickelson not only didn't win his first British Open crown, but he didn't even make the cut for the championship rounds. Worse than that, he missed the cut by a whopping eight strokes. Mickelson has looked lost for much of the year, racking up huge scores in opening rounds. Even when he manages to piece together solid late rounds in PGA events in 2012, the damage has generally already been done.

Might we be seeing a return to the hard-luck loser image that Mickelson was tagged with early in his career? Either way, his performance in the last two majors -- the British Open and the U.S. Open -- is troubling.

A full leaderboard can be found at Golf.com.

For more on the Open Championship, make sure that you check out our StoryStream as well as SB Nation's dedicated golf hub.