Arizona State is well represented in the 2012 London Olympics. For the first time, they have a steeplechase runner. Meet Kyle Alcorn.

Arizona State University has a slew of Olympians representing the athletic program and different nations. The 10th of the 15 Sun Devil Olympians is Kyle Alcorn, who will be competing in the 2012 London Olympics games in the steeplechase race. The 27-year old husband and new father will be competing in the Olympics for the first time and is the first Sun Devil ever to compete in the steeplechase.

Making the Olympic team is something Alcorn dreamed about from his youth. "Since watching it as a little kid, the '96 Olympics, watching Michael Johnson win golds, it was always a dream of mine," said Alcorn. "I never thought it would actually come true, but definitely the last five or six years I've been really working hard to make the 2008 team and then didn't make it that year, but yeah to make this team was a huge goal of mine."

The steeplechase is a unique race, one that most aren't familiar with, except that it is a race that it seems is only won by Kenyans.

"Steeplechase is 3000 meters, just under two miles," Alcorn explains. "It's kind of like a ling distance hurdle race. So there are five barriers a lap, one with the water pit behind it you've got to kind of get through. It's a little bit of hurdling and distance running."

It isn't a race that you see in high school track. Alcorn before going to Arizona State ran the mile and two-mile races. He made the transition to the steeple as a freshman. "My coach enjoyed coaching the steeplechase, so he put all the freshmen through it just to see who would make it through it," he recalled. "I picked up on it faily quickly, so I expressed interest in it too." The fact that he had run distances before and his best event in high school was the two-mile helped. "They're about the same distance, so it was kind of an easy transition there," he said.

As a Sun Devil, he made the national meet as a sophomore, but it wasn't until his junior year that he began to believe that the Olympics was a possibility. He was an All-American that year. "I competed well and then, going into my senior year, I knew that I had a shot at returning to become a national champion," he said. "That was then the goal and then with that goal, I knew that the Olympics could be a possibility if I could pull off that task."

In the Olympic Qualifiers, he had to finish at least third to make the team. He finished exactly third, so he knew when he crossed the finish line that he was an Olympian.

"It's hard to explain," he said, describing how he felt. "It's just a huge sense of accomplishment...I was like I knew I made the team going to London and it was just a huge honor as well to be representing the United States. We have a very strong track team and always compete well against the world, so it's just an honor to be a part of a track team like the US , too."

The race didn't come without adversity. He suffered from leg pain down the stretch and even said his legs "were done."

Pushing through the pain is the result of all the training he does. He runs about 95 miles a week, in addition to twice a week at the gym to focus on strength training and core strength. He also works with physical therapists, massage therapists and chiropractors because "95 miles can take a toll on your legs."

The biggest challenge of his sport and preparing to fulfill Olympic dreams is "staying healthy."

"I've struggled with injuries before in the past, nothing that's been real major," he said. "But if you miss a couple of weeks it really sets you back about a month there because every two weeks you miss, it takes you about two weeks to catch back up. Staying healthy is the most important part."

He did it. He stayed healthy and he made the Olympic team. He will be representing the United States, but not only the country. He will be running for his family, his child, "all the Sun Devil pride back here and Clovis, California -- his hometown.

Can we expect a gold medal from Alcorn?

"Gold would be a very high expectation," he responded with a smile on his face. "Right now I'm just focusing on trying to make the finals."

And that in itself is incredible.

here's hoping that everyone here in Arizona will root for him. The steeplechase is not a well known race, but with one of our own from ASU competing, it hopefully is excuse enough to pay attention. 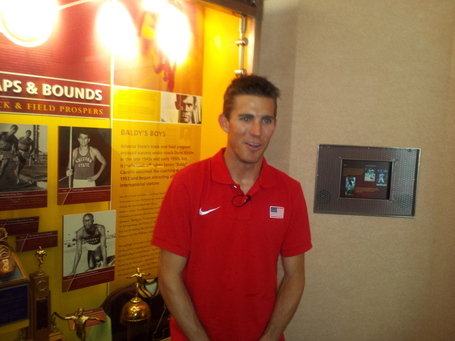