The Fusion got goals from Mickey Daly in the 34th minute and Chris Tsonis in the 75th, strengthening its grip on the division lead with 32 points while FC Tucson remained at 24 and in second place.

For first-year PDL club FC Tucson, finishing in the top two of the division means a spot in the league playoffs. A third-place finish or lower and Arizona's highest-level soccer club's season is over.

Here's some video from tonight's match:

Tucson has four regular-season matches left to play, and is trying to hold off the third-place Ogden Outlaws -- who lost their opportunity to move to a point behind FC Tucson after their loss Saturday.

FC Tucson (below, in black) had chances, starting off the match well on the attack and missing a chance to tie when forward Donny Toia's shot from near the goal was deflected just wide. 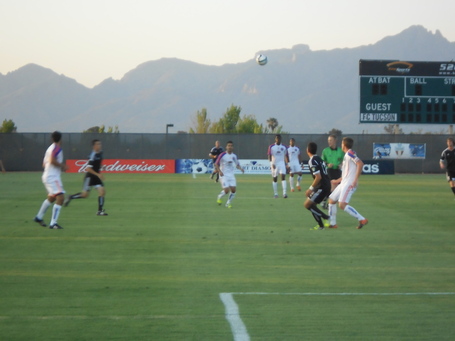 The Fusion were out to make a statement, and did so via some rough play, especially late in the match, and when Daly knelt down a la Tim Tebow after his goal. That didn't sit well with the Cactus Pricks, the small-in-numbers but energetic and vocal FCT supporters group, who let the visitors have it from the crowded bleachers.

"It's a great opportunity, and we didn't capitalize on it, simple as that," Toia said. "We had our chances. We worked hard on offense and defense, we just couldn't get it done."

The home side had another great chance in the 65th minute, but an attempt by defender Conor Spence from very close range off a cross into the box sailed over the crossbar.

"We should have equalized. We put one over from inside the 6-yard box," FCT coach Rick Schantz said. "If that goes in it's a whole different ballgame. The gap between the two teams is very easy to explain. They are just technically cleaner in most positions. We are athletic enough to compete with them, and this is our problem all season long, when we get chances, we're not putting them away at a high enough percentage rate."