Coyotes in D-Backs Gear? You Bet

Share All sharing options for: Coyotes in D-Backs Gear? You Bet

Usually at this time of year, the Phoenix Coyotes are headed home, or already at their respective homes recuperating from a long season. Not today, and not in 2012. The Coyotes have a few days before their NHL Western Conference finals series against the Los Angeles Kings starts, so a few of the players headed over to Chase Field to meet some Diamondbacks on Wednesday.

Smith, the biggest hero of the Coyotes' playoff run, said he's a Toronto Blue Jays fan from the early 90s growing up in the province of Ontario in Canada.

"Now living in the desert, you have to cheer for the team that's in your town. Been a baseball fan my whole life and will be til I die," Smith said.

He and Doan proceeded to throw former Blue Jays names back and forth. Joe Carter, Lloyd Moseby, Pat Borders, Jimmy Key, Kelly Gruber, Tom Henke, etc. Here are the players in front of the D-backs' dugout. 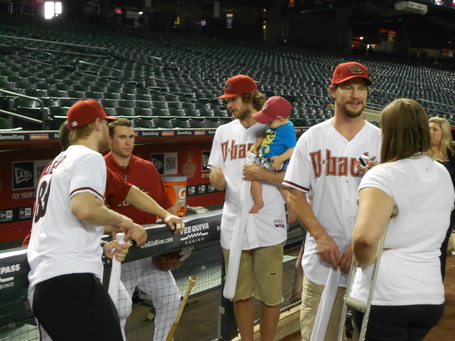 Smith never played baseball growing up but did play softball and said he'd love to try batting practice. He can ask Larry Fitzgerald of the Cardinals how easy that is.

Then again, Smith sees pucks coming at him as fast or faster than major-league fastballs, so he might be pretty good at hitting.

It was Smith's first time at Chase Field.

"Most other guys are at home now enjoying the spring weather in Canada," he said. "We had a couple of days off, let the body relax a little bit and get back out tomorrow and start practicing again and doing some scouting on the other team."

Smith added he thinks the series with the Kings will start Sunday at Jobing.com Arena in Glendale.