Share All sharing options for: NBA Playoff Schedule: Bulls Take Tuesday Off, Grizzlies Will Bounce Back

Tuesday's 2012 NBA Playoff schedule brought us one surprise that in retrospect isn't all that shocking. Of the three games played, two went as expected. Wednesday night we get three more and while we can't tell you which, we can virtually guarantee a surprise...or at least something worthy of a brief but intense Twitter Storm. 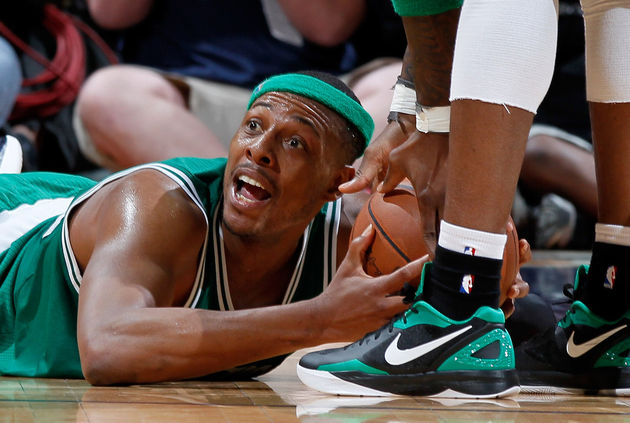 Paul Pierce #34 of the Boston Celtics reacts after being called for a fould against the Atlanta Hawks in Game Two of the Eastern Conference Quarterfinals in the 2012 NBA Playoffs. (Photo by Kevin C. Cox/Getty Images)

The Boston Celtics were supposed to lose the Atlanta Hawks without Rajon Rondo who took the night off to celebrate bumping an official. Instead, the Hawks predictably failed to get the job done and in the process lost Josh Smith to a knee injury of unknown severity.

In a slightly more surprising game, the Chicago Bulls defense decided to mourn the loss of Derrick Rose by not bothering to show up. The result was a home court loss destruction by the Philadelphia 76ers. That series is now tied 1-1 and headed back to the land of the Liberty Bell where the Sixers will most likely crack under the pressure.

The only game out West featured the Los Angeles Lakers controlling tempo and beating the Denver Nuggets to take a 2-0 series lead. The Nuggets played well but are simply over-matched in this series unless they can crank up the pace to HIGH and hit a ton of outside shots.

Utah Jazz at San Antonio Spurs at 7:00 p.m. ET / 4:00 p.m. PT on TNT. The Spurs were a bit rusty to start this game but still easily handled the Jazz. Utah is going to be hard pressed to get one win in this series and it isn't likely to come on the road where they don't play very well (11-22).

Indiana Pacers at Orlando Magic at 7:30 p.m. ET / 4:30 p.m. PT on NBA TV. The Pacers woke up in the second half of Game 2 and tied the series. They should be able to cruise through the next three with no problem. If you need to pick just one game to watch, don't make it this one.

Los Angeles Clippers at Memphis Grizzlies at 9:30 p.m. ET / 6:30 p.m. PT on TNT. This is the main show on Wednesday night. The Grizzlies blew their big fourth quarter lead despite being the better team. If they are for real, they will bounce back and take care of the Clips at home. They're for real.