Monday's 2012 NBA Playoff schedule gave use two so-so games and one really fun contest. Not surprisingly, the really good game featured the Western Conference Finals rematch between the Oklahoma City Thunder and the Dallas Mavericks. The Thunder took a 2-0 series lead with their win (102-99) 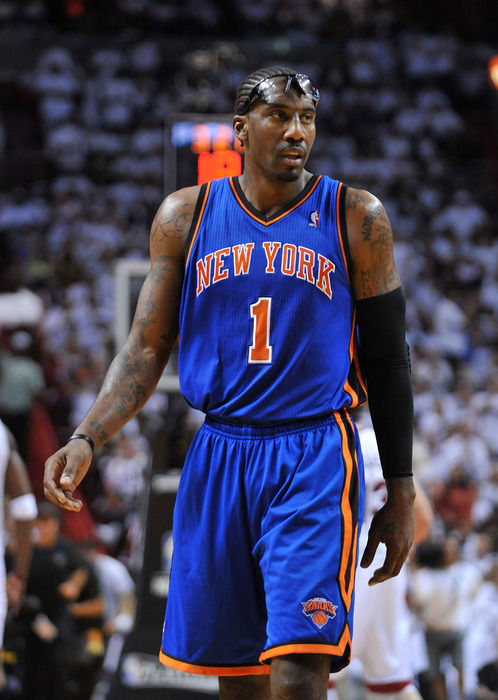 New York Knicks power forward Amare Stoudemire (1) during the first half of game two in the Eastern Conference quarterfinals against the Miami Heat of the 2012 NBA Playoffs at the American Airlines Arena. Mandatory Credit: Steve Mitchell-US PRESSWIRE

The game once again came down to the wire with Jason Terry having two shots at tying the game with a made three-pointer. He missed both attempts. The Thunder have yet to shoot the ball well and are showing flaws, but they've been good enough to beat the Mavs who lack enough punch. This series should go at least six games, however, unless the Thunder are able to find another level of play on the road.

The big story in the NBA from Monday's playoff action is the status of Amare Stoudemire's hand. He reportedly hit the glass door of a fire extinguisher case and caused himself some damage. Not the smartest thing Amare's ever done but we still don't have all the details. With the Knicks trailing the Heat 0-2 in the series, his availability for the next few games is unknown.

Boston Celtics at Atlanta Hawks at 7:30 p.m. ET / 4:30 p.m. PT on NBA TV. The Celtics will be without Rajon Rondo who is serving a one-game suspension for bumping an official. The Hawks will need to stay focused (never a strong suit for that team) and hopefully get better shooting from Joe Johnson. If they do, they can take a nice 2-0 lead in the series.

Philadelphia 76ers at Chicago Bulls at 8:00 p.m. ET / 5:00 p.m. PT on TNT. The Bulls will begin their post-Derrick Rose playoff run Tuesday, but they still should be fine against the offensively-challenged 76ers. Rose missed almost half the season with other injuries and back up CJ Watson is playing well.

Denver Nuggets at Los Angeles Lakers at 10:30 p.m. ET / 7:30 p.m. PT on TNT. The Lakers killed the Nuggets in the paint and there's no reason to think that will change anytime soon. The Nuggets will need to play VERY fast and to try and wear down Andrew Bynum and they'll need a ton of threes to win. Possible, but not likely.