Tony Moreno and David Benavidez are two of the local fighters to be showcased at Night of Legends II, a boxing event Saturday at the Celebrity Theatre in Phoenix.

Ten bouts are on the schedule this Saturday at Phoenix's Celebrity Theatre for Iron Boy Promotions' Night of Legends II, featuring some local names with a lot of promise and potential to achieve bigger things in the pro fight game.

The main event is a 140-pound contest between Phoenix's Abel Ramos, 2-0 as a professional, and Joaquin Chavez of Los Angeles, 1-0 plus a pair of draws. But several of the bouts have main-event drawing power, including a 122-pound showdown between Jesse Ruiz and Emilio "Milo Time" Colon-Garcia, two fighters from Phoenix with large followings.

The last time fans saw Milo Time in Phoenix was on Oct. 21 of last year at the downtown Madison Events Center, when he was featured in a co-main event and won. He's now 4-0-1. Ruiz, nicknamed "The Razor," is up a few pounds from his fight that night, in which he was defeated despite a clear reach advantage.

Another battle of Phoenix boxers features Tony Moreno, another relatively new fighter on the scene, and Julio Rodas, who lost perhaps the most action-packed fight on Oct. 21 despite scoring an impressive knockdown. This weekend, it's Rodas and Moreno at 144 pounds.

Moreno, 20, started boxing at age 14 after watching his older cousin. He's 1-0-1 and defeated Michael Salcido, who got the four-round decision over Rodas in that October fight.

"I really don't care how many fights he has, I just know I'm ready for this fight, I'm 100 percent prepared and I'm going to give all I got," Moreno, a north-central Phoenix resident, said.

Night of Legends II also features a fighter with a familiar last name in boxing circles not just in the Southwest but nationally. David Benavidez seeks to step out of his older brother Jose's growing shadow. The 6-foot-1,190-pound amateur has had trouble finding an opponent because of his size -- he dropped from 240 pounds -- and is excited to get in the ring Saturday.

Jose Benavidez Jr. is a rapidly rising star in the light welterweight division, for now, with a 14-0 record. David Benavidez (in photo below) is four years younger (age 15) and has the advantage of having been around big-time fighters and sparring with some of the best. 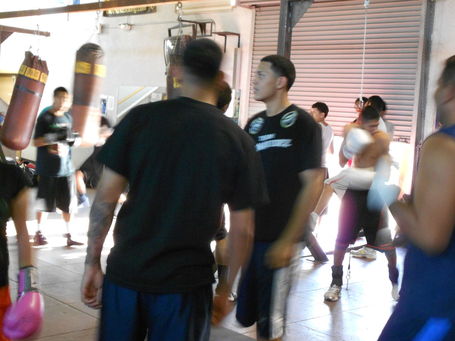 Though he hasn't fought in four years, David says he's ready. He does his school work online and trains in Los Angeles and Phoenix -- L.A. is home though he was born in Phoenix -- and is more committed to boxing as he's gotten older.

"I've seen what my brother can do, and I've been training with him my whole life so I've seen him blow up and I thought to myself, 'Why can't I do the same thing?'" David said.

The first bout is scheduled for 7 p.m. Tickets are $20-$50 and are available through the Celebrity Theatre website and box office.